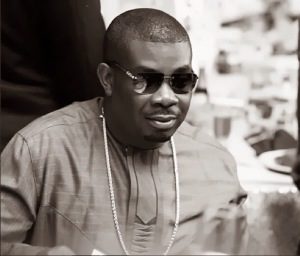 1. DON JAZZY
Don Baba! Don Jay! Don Jazzy is probably one of the most vocal celebrities out there. But we?ve never known him for being vocal in a negative manner. He has fun conversing with his fans on twitter, and if it?s the right day.. He?ll even throw out a couple of free recharge cards!! He is so humble. .very humble and friendly. .you doubt? Ask his twitter followers.

2. 2Face Idibia
There is nobody on earth that could contest 2Face?s position on this list. Say what you want about his marital life, or the life of his baby mamas.. One thing for sure is that 2Face is always kind and giving to his fans. Never does he act proud, or carry himself like he is more than he is. Even though he is an international superstar who has opened the doors for SO MANY young Nigerian artists who are making it big in this day and age.

3. FUNKE AKINDELE
Despite the controversy surrounding her divorce right now, Funke Akindele is still managing to make us smile with her movie roles. She has sky rocketed into the lime light ever since her role in Jenifa, and she has managed to maintain a humble and appreciative attitude throughout. She?s a beautiful and very entertaining actress.

4. OLAMIDE
Fondly called baddoo by fans. .The voice of the street! EVERYONE LOVES OLAMIDE. Men, Women, Boys, Girls. Everyone loves Olamide period. Because he raps from his heart.

5. GENEVIEVE NNAJI
The beautiful Genevieve. Many call her the most beautiful woman in Africa. Whether you agree or not, one thing is for sure?She?s a damn good actress with a classy and sophisticated fashion sense! She is praised by many around the globe, and she always takes time to remember where she comes from. Even when baited to bad mouth her country in international news interviews, she refuses to say anything bad about Naija. Got to love her for that!

WHO SHOULDN?T BE ON THIS LIST? WHO IS MISSING?