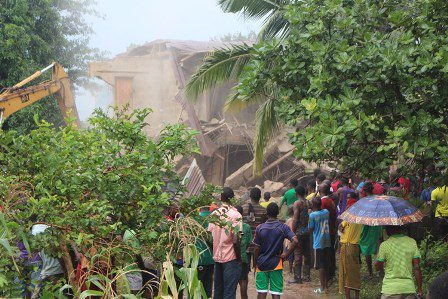 Authorities in Nigeria’s economic hub Lagos have begun demolishing “unfit houses” in an area where the collapse of a school building killed at least 12 pupils early this year.

Olufemi Oke-Osanyintolu, head of the Lagos State Emergency Management Agency (LASEMA) told Xinhua on Saturday that a three-storey building located at Bamigbose street on Lagos Island is the first to be pulled down.

He said the building is in a state of distress with visible crackings on different parts, adding another distressed building on the same street was also brought down to ground zero on Wednesday.

According to Oke-Sanyintolu, the demolition was carried out on recommendations from the Lagos State Building Control Agency, the Material Testing Agency and Ministry of Urban and Physical Planning.

“The agency was committed to safety of lives and property of residents in the state and the state government had resolved to redevelop Lagos Island,” Oke-Sanyintolu said, adding there are many buildings that are over 100 years old across the state.

Local experts said building collapses were frequently reported in Nigeria because some property owners and developers do not adhere strictly to planning and building laws and regulations. Enditem