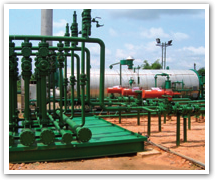 Nigeria?s recent GDP re-basing may have brought attention to the larger-than-expected role the services sector plays in driving growth, but in recent weeks, it has been the hydrocarbons industry taking centre-stage. A major initial public offering (IPO) in May combined with a pair of significant investment deals have highlighted not only the continuing appeal of one of Africa?s largest oil producers, but also the rising profile of the country?s indigenous firms.

Seplat Petroleum Development Company raised $500m in its landmark IPO, which was launched in mid-May on both the Nigerian and London Stock Exchanges and marked the biggest listing in Nigeria since Starcomm?s $550m listing in 2008.

The flotation, which saw Seplat valued at $1.9bn, is seen as an important indicator of the rising strength of Nigeria?s indigenous oil and gas companies. While the pricing of ?2.10 ($3.54) sat towards the lower end of its ?1.95-2.25 ($3.29-3.79) target range, shares having risen substantially since trading began. Cash raised by the IPO will be used to drive forward Seplat?s expansion plans and help pay down its $141m net debt, the firm said in a statement.

Seplat, which was formed in 2009 from two smaller firms, has a 45% stake in three fields in the resource-rich Niger Delta, acquired in July 2010 from a consortium led by Anglo-Dutch Shell. Seplat operates the blocks, with production hovering around 60,000 barrels per day (bpd). It is also the only oil company in Nigeria pumping above capacity, according to local media.

Seplat?s managing director and CEO, Austin Avuru, said the company, whose main shareholders include its Nigerian founders, the French oil firm Maurel et Prom and Mercuria, a Swiss commodities trading company, had the reserves base to expand its business. The firm aims to more than triple its gas output from 130m scf (standard cubic feet) to 400m scf by 2016, while hiking oil production from 72,000 bpd to 84,000 bpd within the same timeframe.

International press reports suggest that the successful Seplat launch will relay the benefits of IPOs to local players, paving the way for more Nigerian oil and gas companies to list.

The move benefitted from strong government support, in keeping with a long-standing push by Nigeria to expand activity from domestic operators and increase local revenue capture. ?We support Nigerian oil companies in the upstream, midstream and downstream oil and gas space,? Minister for Petroleum Resources, Diezani Alison Madueke, said at the listing presentation at the NSE. ?This is part of a deliberate government policy of encouraging oil sector participation for our local companies. We expect more Nigerian oil and gas companies to list on the NSE in the future.?

Seplat?s IPO has not been the only indicator of an improving outlook for the country?s indigenous firms. Temasek, Singapore?s sovereign wealth fund (SWF), announced on April 15 that it had sealed a $150m deal to become one of the largest shareholders in Seven Energy, a Nigeria-based oil and gas group. The World Bank?s investment arm, the International Finance Corporation (IFC), invested $105m in a stake in Seven Energy during the same month, and other SWFs are also reportedly eyeing Nigerian oil and gas companies.

Nigeria?s home-grown firms are strengthening their position in the market, having acquired assets worth around $5bn ? primarily onshore blocks ? from IOCs over the past five years. Majors have increasingly been shifting their focus to offshore and deep offshore operations in the Gulf of Guinea, leaving firms such as Seplat and its peers Oando and Shoreline, to expand their presence onshore.

On April 22, Reuters reported that the government had awarded Nigerian companies the lion?s share of a $40bn package of oil lifting contracts, totalling around 340m barrels, in line with the government?s efforts of recent years to increase local content and indigenous participation in the sector. The contracts allocate crude oil to trading companies that can then sell the product on.

The move is not without controversy, with critics including Swiss-based NGO The Berne Declaration and London think tank Chatham House pushing for greater transparency in the bidding and tendering process. However, the success of Seplat?s IPO and the new shareholders in Seven Energy indicate that Nigeria is capable of producing domestic players with the potential to play a key part on the global stage. And for all of the growth the country has seen in recent years with services like telecoms and retail, hydrocarbons still remains Nigeria?s main engine.