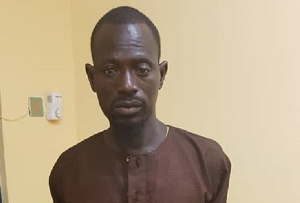 The Kasoa Central District has arrested one Abdulai Hakuy, a Nigerien for attempting to obtain a Ghana Card at the ongoing National Identification Authority registration exercise at Adam Nana a suburb of Kasoa last week.

According to the District Police Commander of Kasoa, Superintendent Samuel Odame, on February 20th, the suspect appeared at the registration centre with one other person by name Nurudeen Mohammed, who claimed to be a Ghanaian to guarantee for Abdulai Hakuy (the suspect).

He said however, the registration officials became suspicious and decided to interrogate the two people.

The commander said in the course of the interrogation, the two took to their heels but suspect Hakuy was arrested and handed over to the Police.

Mr Odame said during Police investigations, the suspect admitted not being a Ghanaian but rather from Niamey, Niger.

He said a search conducted on Hakuy revealed Nigerien National Identification Card bearing his name and a Ghanaian voter ID Card which he claim was done for him at a polling station at Kasoa Zongo Electoral Area during the recent limited registration exercise.

The suspect is currently in police custody to be arraign.