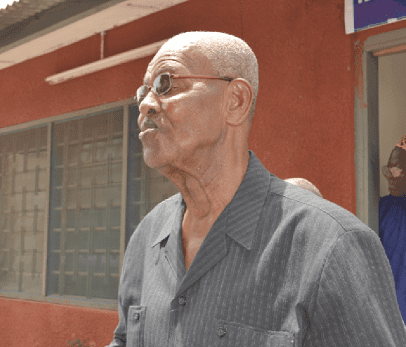 The leadership of Nii Adama Pataku family of Mmerku and Akanmajey in the Greater Accra region has expressed worry about the illegal sale of their lands located at Abam-man near Amasaman by a group of people who are not members of their family, a situation they have described as unfortunate and dangerous for their future generations.

Speaking with a section of the media at Bubuashie,a suburb of Accra, the head of the Nii Adama Pataku family of Mmreku and Akanmajey, Alhaji Abdullah Showme Williams indicated that the fraudulent and unauthorized sales of lands within the Abam-man area within the Ga West District has a serious reprecautions in the future and tasked public not to deal with anyone on said lands than one James Ashie Laryea who is acting as an attorney on Abam-man lands.

Alhaji Showme Williams who is the former executive member of the Ghana Boxing Authority cited the involvement of one Nii Ayikai III and his associate, Henry Ashilley alias Joe Boy in the fraudulent sale of Nii Adama Pataku family lands. According to head of Nii Adama Pataku family several meetings held and caution letters issued to Nii Ayikai III and his cronies to desist from the illegal sales of the land has proved futile, a situation which has become worrying for the family. “ I hereby protest against the involvement of Nii Ayikai III in the fraudulent sale of Nii Adama Pataku family and at situated Abam-man by his associate in crime Henry Ashilley alias Joe Boy the notorious land guard for which Nii Ayikai III has always issued indentures”. He stressed that the unlawful sales of land by Nii Ayikai and his associates has ended in court in some cases by making reference to a purchase by one Salina Bosompimaa.

“the fraudulent sale of that portion of the Nii Adama Pataku family land at Abam-man instead of Ayikai Doblo as deceitfully and smartly stated in the fictitious document executed by Nii Ayikai III in respect of the land to Salina Bosompimaa is in gross defiance, floutation and in contempt of the interlocutory judgment made against Henry Ashilley by the High Court Accra dated 30th July 2013”.

Alhaji Abdullah Williams mentioned that despite all the negative and illegal acts of Nii Ayikai III on their family legacy, he has also over stepped and defiled the traditional and customary norms of their family by enstooling one Nii Ayi Ashilley as head of Nii Adama Pataku family. He described that conduct as unlawful and criminal since Nii Ayikai III is not a member of their family and therefore has no business in installing a rival head of the Nii Adama Pataku Family.

“ I also protest against the illegal uncustomary enstoolment of Nii Ayi Ashilley( the senior brother of Henry Ashilley the notorious land guard who has been in bed with Nii Ayikai III in the fraudulent sales of Nii Adama Pataku family land) as rival head of the Nii Adama Pataku family by Nii Ayikai III’. Alhaji Williams said evidence of the enstoolment can be found in a statement made by the said Nii Ayi Ashilley at the Amasaman Police station. He said Nii Ayikai III’s conduct in this matter is abysmal and tantamount to gross violation of the celebrated traditional norms and practices.

The head of Nii Adama Pataku, Alhaji Williams indicated Nii Ayikai III’s negative acts has been reported severally to the regional and national house of chiefs and therefore requested that he should be invited by the police for interrogations on the various issued leveled against him.

Meanwhile a land purification ceremony has been held at Doblo Abam-man near Amasaman by elders of the Nii Adama Pataku family to fortify the vast land for habitation. According to an elder James Ashie Laryea, the land which was previously used for farming in the colonial days also house their ancestral home and needed to be purify now for commercial and domestic use hence the short ceremony. Both Islamic and Christian prayers were said at the land site after which a ram and sheep were slaughtered.