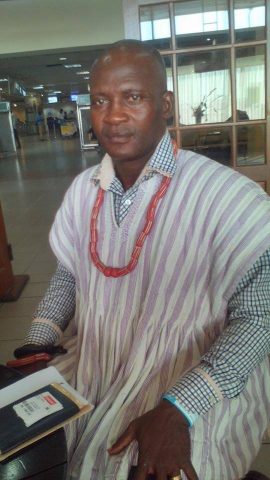 He told Yours Truly he was happy that the Weightlifting Federation President accepted to lead the GOC to a better and higher level after nine months of meeting with other sports federations.
According to Nii Dzata 1, known in private life as Joseph Adotey Mingle, he has also decided to serve on the new board of the GOC to support the new President and lobby for the least financed sports that are not yet considered Olympic Sports.

“Our association, Kick Boxing is lacking many things, we lack equipment and funds to organize our programmes and events, but the new vision is supposed to support all the associations and I believe Kick Boxing will have its share” he said.

“We support a visionary who is not greedy, but prepared to work with others, share and support. We support somebody with a proven record who is capable of doing many things when given the mandate” he expressed.

Nii Dzata 1 said Kick Boxing has been granted provisional Olympic recognition and he is very glad hoping for greater things to come in the future.
He urged members of Congress of the GOC to vote massively for Ben Nunoo Mensah and The Team.

He suggested that the youth should be given opportunities in sports and the Inter Schools and Colleges Sports prrogramme should be reintroduced.

The Sakaman Mankrolo with stool name Nii Saka noted that sports like Athletics, Football, Basketball, Hockey, Volleyball, Handball, Taekwondo, Tennis (if possible), Table Tennis, Netball, Chess and Scrabble should be compulsory in Senior High Schools and there should be annual competitions to unearth talents who would be trained for regional and national competition, and later turned to international stars as was happening in the past.

He called for the return of the Academicals, the national students sports teams if the new government want the youth to love sports.