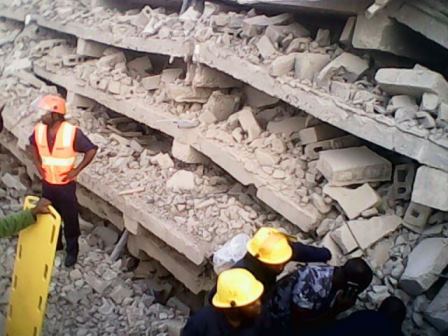 The Accra Metropolitan Assembly (AMA) has interdicted and arrested three of its officials over the collapse of a 6-storey building at Nii Boi Town in Accra.

The three building inspectors who work at the Okaikoi North Sub-metro of the Assembly are found liable for acts of negligence as they failed to follow proper procedure in their monitoring activities.

A statement signed by the Mayor of Accra, Dr Alfred Okoe Vanderpuije, he indicated that the Assembly has launched investigations into the incident and has resolved to arrest the three officials for the roles they played which led to the disaster.

“They have been interdicted for 6months without pay,” the Mayor stated in the release.
The Mayor also put it on record that the owner of the building, Mr. Omari has been arrested for not having title to the land on which the building was constructed, and that Mr. Omari failed to obtain development and building permits.

?Mr. Omari failed to stop construction works when he was served with three (3) ?stop work? notices by A.M.A,? he indicated.

The mayor noted that the decisions taken by the Assembly were recommendations from a committee?s investigation launched into the development.

He pointed out that all the suspects including the three A.M.A officials and the Owner of the collapse building, Mr. Omari have been handed over to the Ghana Police Service for further investigations and prosecution.

Last Thursday at about 4:15am, the six-storey uncompleted building collapsed at Nii Boi town, a?suburb?of Accra, in which about five people were reported to have been trapped with one confirmed dead.

The yet-to-be completed building is located behind the?Grand View Hotel.

However, soon after the disaster there have been calls on the President to fire the Mayor, with accusations that he failed to do due diligence.

Meanwhile, it emerged that the?construction?of the building has been stopped several times by the Accra Metropolitan Assembly (AMA) because it has no?building permit?but the owner of the building paid deaf ears to it and continued with the construction, probably because of the help he received from the three suspected officials.

The Mayor, Dr Alfred Okoe Vanderpuije, has also ordered that the Grand View Hotel which is also situated in the same compound with the collapsed building be evacuated and shut down with immediate effect.

According to the Mayor, the Grand View Hotel needs to be subjected to a complete and thorough assessment to verify safety of people occupying it.

He however assured the general public that the A.M.A is committed to ensuring the safety of all buildings in the Metropolis.

Interview with Rupert McCammon on What to Expect at AFSIC 2022

Rise to the challenge: building intelligent enterprises in West Africa