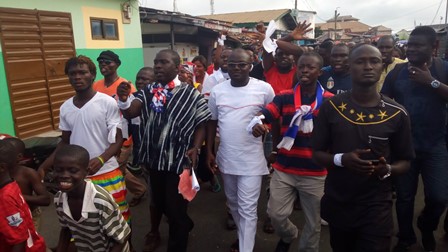 NPP’s Bannerman, who has said he is optimistic about winning the Odododiodoo seat on 7 December this year, described Nii Lantey Vanderpuye’s assertion as laughable and shouldn’t be taken serious. 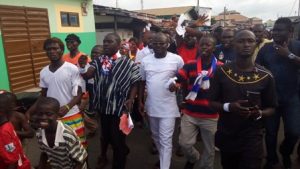 Below is the full statement;

Our attention has been drawn to above news report which was published on your online portal dated September 13, 2016 By Nana Afrane Asante|3news.com|Ghana.

We wish to state in unreserved terms that the assertion by the Hon. Member of Parliament for Odododiodoo, Nii lantey Vanderpuye should not be taken seriously as they are mere rhetoric’s, baseless assertions and without any informed analysis of the current political and electoral happenings in the constituency.

We wish to remind all that, this same Nii Lantey Vanderpuye made similar pronouncement in 2012 against Mr. Victor Okaikoi who eventually pulled 36.58% of the votes.

We want to ask why he Nii Lantey Vanderpuye was not bold enough to keep to his words or perhaps was not man enough to deny himself the desperation of going into the House of Parliament after the first attempt in 2004 failed due to his use of dubious & fraudulent means.

Nii Lantey Vanderpuye might have won the 2012 elections alright but we find his assertion laughable and unguided that in 2016 he would again make such an unfounded statement when he couldn’t keep the one he made in 2012.

If the historic facts available to us are anything to go by, we believe Hon. Nii lantey Vanderpuye is not credible enough to call such a bluff and he is totally lost in the current political happenings in his own constituency and thus a huge defeat awaits him in Odododiodioo come Dec 7, 2016. That, we can assure him.

We therefore, will like to advice the Hon. Nii Lantey Vanderpuye to put his mind to fulfilling the numerous promises he has made to the people of Odododiodioo such as; construct 3 stroey houses in Odododiodioo, provide cold store facilities, build the Slaughter house, Salaga Market and provide households with toilets facilities among others than to call the bluff of his opponent.

We, the NPP in Odododiodioo have put forward a solid front ahead of the 2016 elections in the candidature of Mr. Bannerman who is not a family relation of Mr. Vanderpuye as the latter wants the world to believe and we are sure that history is about to repeat itself in the same manner as it happened in 2000 under Hon. Reginald Niibi Ayibontey.