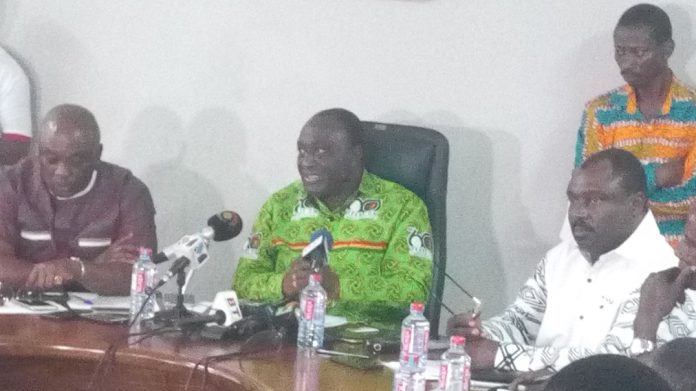 The Minister of Trade and Industry, Mr. Alan Kojo Kyeremanten, has inaugurated a nine-member board of Directors for the Ghana Trade Fair Company Limited in Accra, in expection of enhancing domestic retail trade and as well as to promote made-in-Ghana goods.

Mr. Kyeremanten said, it has since been government’s ambitions to drive industrialisation across the length and breath of the country and as well as to the international level. Hr therefore, urged the board to help strategise plans to achieve the agenda.

He added that, government was working earnestly to transform the company into a world-class facility to incorporate a national conference centre and entertainment site among others, to put the country on the world map.

He therefore charged the board to help promote the country’s products in the international markets and also assured government’s commitment to support the private sector to establish industrial enterprise across the districts.

“Government aims to decentralise industrialisation and bring industries to the door steps of the citizenry, and that, this could be effective with the support from all and sundry,” Mr. Kyeremanten noted.

The rest are Mrs Ruth O.Q. Addison, Madam Fatimatu Abubakar and Mr Hubert Sevor, all as members of the board.

Mr. McKorley on behalf of the board members, thanked the President for the confidence reposed in them and pledged to redeem the image of the company again.

Nonetheless, the Trade Minister also without delay, re-constituted a 12- member task force for the Ministry to deal with the smugglers, smuggling pirated goods into the country.

Mr. Alan Kojo Kyeremanten, fully backed by his two abled deputy ministers, Mr. Carlos Kingsley Ahenkorah and Mr. Robert Ahomka- Lindsey, urged members of the taskforce to perform their core duties without fear or favour in anyway, in order to improve upon local production in the country.

The rest of them are; Mr. Christopher Adjetey from the Ghana Standard Authority, Mr. Alpha Abdullah Shaban from Ghana Union of Trade Association, Mr. Samuel Hemans Addy of Akosombo Textile Limited, Mr. Jonathan Sarfo of Tex Styles Limited and Mr. Francis Omari from Printex Ghana Limited, all as members of the Taskforce.

Mr. Mohamadu Sumani, the chairman of the Taskforce, thanked President Nana Akufo-Addo for the opportunity and assured government of their commitment to perform their core mandate as expected.

SEC to hear some Directors of defunct FMCs