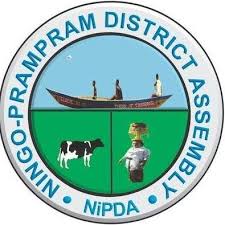 The event brought together community members, chiefs and opinion leaders to the outcomes the exercise conducted by the Social Audit Committee (SAC) of NiPDA with support from People’s Dialogue.

The Focal Person of the Social Auditing Committee of NiPDA, Madam Zubaida Damago, said SAC was a citizen-led committee made up of representatives of Civil Society Organizations within the district and two traditional authorities from Ningo and Prampram traditional areas.

Madam Damago said the exercise was also a means of ensuring accountability as community members came together to evaluate the interventions the Central Government had made for the District.

A representative of the Civil Society Organizations on the committee, Mr. Mahmoud Mohammed Edward Nantomah, during a presentation, said the committee looked at two thematic areas which were education and health.

“We looked into the construction of a one six unit, one bedroom semi-detached teachers’ bungalow at Mangotsonya District Assembly Basic School and into the completion and furnishing of a community health planning service at Ayetepa,” Mr. Nantomah informed.

Touching on education, Mr. Nantomah said the expectation for the construction of the teacher’s bungalow was to ensure “that teachers would be accessible to pupils even after school hours for any academic assistance.”

He said in terms of health, the team considered the completion and furnishing of the Community Health Planning Service ( CHPS) and Supply of furniture and other medical facilities at Ayetepa adding that the health facility was expected to improve quality and access to good and primary health care and timely response to health-related emergencies.

Mr Mahmoud said in an interaction with some of the indigenes, it was revealed that there were only two health workers in the area and called more hands to reduce the pressure on them insisting that the facility must accept National Health Insurance Scheme (NHIS) card holders.

He said even though the facility was not fully completed, it was already in use and had been handed over to the Health Directorate of Ningo- Prampram.