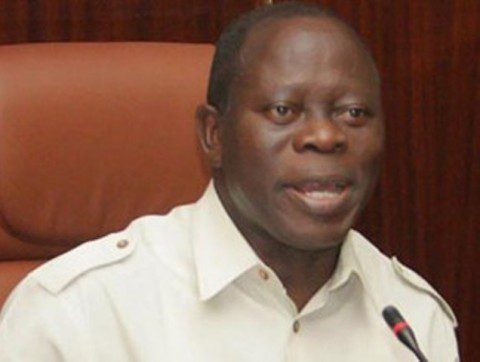 Governor Adams Oshiomhole has flagged off the new 64-page e-Passport in Edo State, saying the new passport released by the Nigerian Immigration Service (NIS), is in tandem with what obtains in other civilized parts of the world.

Speaking at the event at the Offices of the Nigeria Immigration Service in Benin City, yesterday, Oshiomhole also commended the Immigration for their contribution to the maintenance of peace and security in the state.

He said, ?I had wondered quietly why the passport carries few pages as a result of which you are compelled to have more than one passport. When you have a British passport of ten years, if you are a frequent traveler, within two years, you would have finished the pages of the passport and yet some of the visas are still valid. The result is that most frequent travelers find themselves carrying bundles of passport, the current one and the one that carries your valid visa.

?It seems to me that it is only Nigerians that carry more than one passport. Sometimes, I find myself carrying more than one and when they ask me, I say, this one is where the visa is and then this one is the current one. I think for me therefore, your management has responded proactively to something that has been of concern to many people especially those who are frequent travelers and this to me is what leadership is about.?

The Governor appreciated the President, Goodluck Jonathan, the Minister of Interior and the Comptroller-General of the Immigration for the wonderful initiative as it is a capital benefit to every person who wants to travel.

?At a time when foreigners, some with criminal intentions attempt to freely violate our boundaries and take advantage of our hospitality to perpetrate crime, the Immigration Service has been very helpful at the level of security committee in Edo State. They are making their own contributions to ensure that foreigners with criminal intentions, whether they are insurgents or kidnappers or they are involved in any form of criminalities are identified and proactively dealt with.

?I want to assure you that whatever we can do at the level of our state government to identify with your service, be assured of our willingness to cooperate with you?, he said.

Earlier, the Deputy Controller of the Immigration Service, Edo State, Mrs. T. Agwai who stood in for the Comptroller, Mr A.O Alana said it was a major shift in passport technology and first of its kind in Africa adding that Nigeria was the first to pioneer it in Africa and 50th in the World.

She disclosed that it conforms to the International Civil Aviation Organisation Standard and recognises the holders distinguishing characteristics for easy clearance.

She advised that the passport be handled with care because once the chip attached to it is damaged, the authenticity cannot be verified and the passport will be rendered useless.