The Volta Regional House of Chiefs is to suspend the Paramount Chiefs and Queen Mothers of Nkonya and Alavanyo indefinitely for their inability to maintain peace between the two traditional areas. 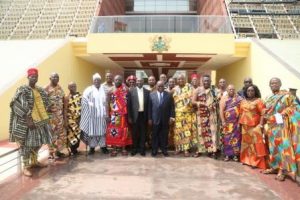 The sanctions followed a shooting incident at Nkonya purported to have been done by unknown assailants from Alavanyo on Wednesday, which led to the death of two people leaving the third, severely injured.

Nana Soglo Alloh IV, President of the House, told the Ghana News Agency that the Standing Committee of the House decided to sanction the chiefs after a meeting with the Regional Minister on Thursday.

He said the suspension was to make the traditional leaders take responsibility for the actions of their subjects.

Nana Alloh said the two Chiefs had on several occasions, committed themselves to peace arrangements mediated by various institutions but to no avail and that punitive measures are needed to be applied.

The two traditional areas have been engaged in a 94 year old land dispute which seemed unending despite efforts by religious bodies, the National Peace Council and government.

In the latest incident, three men from Nkonya who allegedly went to their farms at about 1430 hours on Wednesday to tap palmwine were fired upon by unknown assailants, killing one Akando instantly.

A police source at Nkonya told the GNA that the situation was under control but checks indicate that there could be a reprisal attack.

Recently, Mr Clemence Gyato, the Nkonya/Alavanyo Peace Ambassador, reiterated an appeal made to government to take over the disputed land and use the resources for national development.

He told the Ghana News Agency that his call had become necessary because “the rhetoric is too much and assurances from the two areas are no longer inspiring.”

Mr Gyato said it is unfortunate that though the two traditional areas have had several reconciliation durbars and performed rituals invoking the gods against anyone who attacked the other and yet killings were still being recorded.

He recalled how churches in the two traditional areas held prayer and fasting sessions for peace but to no avail and said the only way out was for government to take over the piece of land.