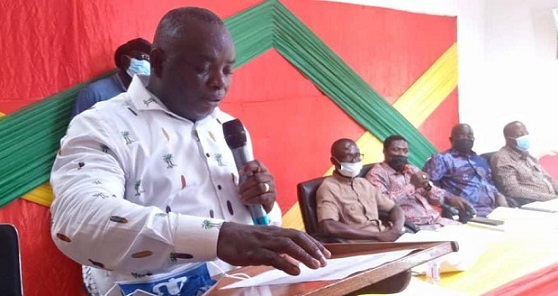 An Educationist/Public Administrator, the Nominee polled 26 out of 37 valid votes cast with 11 against by the Assembly members in an election conducted and supervised by the District’s Office of the Electoral Commission at Busunya, the District capital in the Bono East Region.

In his acceptance speech Mr. Osei-Fosu announced that since the socio-economic well-being of Ghanaians and holistic development of the country had been one of President Akufo-Addo’s major priorities, he would actively engage stakeholders to assist for the pragmatic and effective implementation of the policies and programmes introduced by the President for their positive impact on residents in the district.

Mr. Osei-Fosu therefore assured he would operate all-inclusive administration by accepting constructive criticisms and welcoming objective ideas and suggestions to, among other achievements boost and stabilize the local economy for wealth creation by the people.

Mr. Kwasi Adu Gyan, the Regional Minister, advised the Assembly Members to unite with a common purpose to support the DCE for the rapid progress of the district.