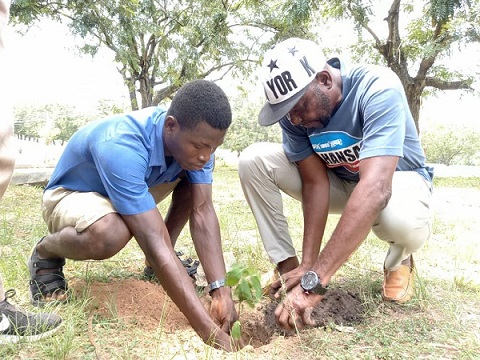 NKOSEC 93 Foundation, a non-governmental organisation (NGO) made up of past students of the Nkonya Senior High School (NKOSEC) 1993-year batch is set to plant and nurture 19,000 drought resistance trees along the Volta Lake in the Biakoye District of the Oti region.

The project is aimed at improving the vegetation in the communities along Volta Lake.
Mr Frank Yirenkyi, Executive Secretary of the Foundation, at a media launch said the project was to commemorate the Green Ghana programme schedule for June, this year with regards to nationwide tree planting exercise.

He said the Foundation had taken it upon itself to be part of the programme by planting 19,000 trees to protect the lake from the devastation of deforestation and get vegetation cover adding that “we all know the importance of this lake to the nation as a source of electricity which needs to be protected as a national asset.”

Mr Yirenkyi said the launch would create awareness and preparations among communities in the District to get involved in the nationwide tree planting exercise while the Foundation also embarked on the planting of the targeted 19,000 trees.

He said as past students, they realised there was more they could do as an NGO rather than an Association that would only help their alma mater which led to the formation of the Foundation.

The Executive Secretary said the Foundation had carried out a sensitisation on bushfire in collaboration with the District Assembly which was successful and the result had shown that bushfire had gone down in the community and the District.

He revealed that the Foundation would engage in a bee keeping exercise in order to keep and sustain the forest as well as give employment to the youth of the community.

Madam Comfort Atta, Biakoye District Chief Executive (DCE) commended the Foundation for the initiative adding that “we all know that in this developmental agenda, it is not a one-person thing, we always need collaborators for us to develop well.”

She said urged all constituents in the District to embrace the exercise in order to green Biakoye since it was not only the duty of the Assembly nor NGOs to plant trees.

The DCE said activities of sawmill operators cutting down trees without replanting would no longer be encouraged in the District and added that anybody who cut a single tree would be made to plant more to give life to the coastal areas in Biakoye.

Coach Josef E. Sarpong, an old student who chaired the launch noted that the success of the project would largely depend on the people of the communities and the Assembly.

“The communities must embrace environmental conservation and must protect the environment. I will urge the various communities to own this project to ensure its success.”

He called on the Assembly to also get involved and own the project to help improve the environment and tasked the media to prioritise environmental issues in the District in their reportage.

Coach Sarpong commended the Foundation for the initiative and appealed to various stakeholders who had an interest in protecting the environment to support efforts of the NKOSEC 93 Foundation.

Mr Aturuh Paul, Assistant District Manager, Jasikan Forest Division noted that the Forestry Commission had been a key stakeholder in ecological conservation and embraced all efforts by individuals and organisations that aim to mitigate climate change.

He said the importance of planting trees along lakes was to intercept the runoff and reduce the severity of floods as well as improve soil conditions on rural properties.

Mr Benjamin A Sackey, Director, Environmental and Sustainable Development Department of the Volta River Authority (VRA), Akosombo, commended the initiative by the Foundation.

He described it as one with a mutual interest for both VRA and the many lives along the Volta Lake adding that the Authority would support the tree planting initiative for it to succeed.