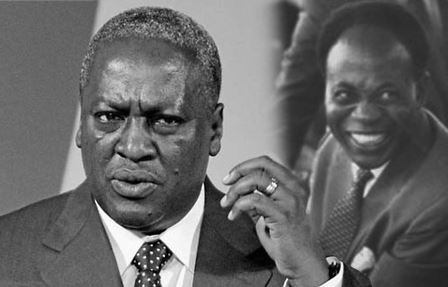 Ever since the coming of the PNDC/NDC some 35 years ago, the political dynamics in Ghana changed from one being dominated by the Danquah /Busia /Dombo /NPP and Kwame Nkrumah/CPP/PNP traditions to one dominated by Jerry John Rawlings /P(NDC) and the Danquah /Busia /Dombo traditions. The Kwame Nkrumah traditions is existing in theory till date. The PNC, CPP and PPP all claim to be holding on to that tradition. Some NDC also claim the NDC is a Nkrumaist party.

History tells us that the Nkrumaist party, the then CPP, dominated the political scene in Ghana for almost 20 years, from its formation in 1949 to its overthrow in 1966. They were so dominant and popular that nobody thought they would ever lose any popular election they will participate in. But several years down the line, we are now seeing several splinter Nkrumaist parties whose fortune in elections conducted in this fourth Republic are nothing to write home about. The question that always come to mind is, how come this once dominant party is now so weak and a pale shadow of its past?

The blame has always been kept at the doorsteps of the Danquah /Busia /Dombo tradition for not only allegedly staging the coup that overthrew Nkrumah in 1966 but also being the main beneficiary of the post Nkrumah Ghana. The Busia’s Progress Party won the 1969 elections after the banning and proscribing of the CPP and all its leading members in that election. This blame has continued from the time of Nkrumah’s overthrow till date. The blame intensifies during election years. Already, president Mahama have asked the people of the Western Region not to vote for the NPP because it’s the grandparents of the NPP that overthrew Nkrumah. He however failed to ask them to vote for the CPP who are also participating in the 2016 elections. But is there truth in this assertion that the forefathers of the NPP destroyed the Nkrumaist tradition?

Sincere analysis of events from 1966 to date tells us a different story. It’s a fact that senior members of the NPP tradition either played a role in overthrowing the Nkrumah regime or they benefitted from its overthrow. It’s however not true that people linked to the NPP destroyed the Nkrumaist tradition. If for nothing at all, the NPP should be praised for trying it possible best to revive the CPP. May be, briefly refreshing our minds on some past events would tell us those that truly destroyed the Nkrumaist parties.

After the overthrow of the Busia government in 1972, a lot past under the bridge and both parties tried in ways to come together to put their acrimonious past behind them. This was somehow achieved as they collaborated in pushing out the military governments of the 1970s and ensured that a democratic election was organised in 1979. The CPP reorganised and rebranded themselves as PNP led by Dr. Limann. The UP tradition split into the PFP and the UNC. The Nkrumaist tradition once again defied history and won the elections. What happened after that was the beginning of the end of the Nkrumaist parties.

Just two years into the PNP administration, they were overthrown by the Rawlings led PNDC in 1981. The PNDC administration then then kept Dr. Limann under house arrest, disorganised the party and collapsed it. The PNDC didn’t end with the Nkrumaist there. They equally confiscated the house of Fathia Nkrumah, wife of Kwame Nkrumah. This forced the woman to go back to her native Egypt. The PNDC saw anything linked to and related to the Nkrumah’s CPP as a threat to their continuous stay in government.

This state of affairs continued into the fourth Republic. With the 1992 elections, the Nkrumaist parties couldn’t unite. The NDC once again capitalised on their disunity and divided them further. It went into an opportunistic alliance with the late Arckah’s NCP. Arckah was made the running mate to Rawlings. The Rawlings administration used Arckah’s links to not only win the western and Central regions but also to cement the support of the NDC there. When that was achieved, Arckah was physically beaten and his party was abandoned. The grassroot members of the NCP were all swallowed by the NDC. Arckah tried to make amends in 1996 by joining the NPP but it backfired.

This aside, the PNDC /NDC government made ridicule of Nkrumah’s vision by selling almost all state owned enterprises established by Dr. Nkrumah. They equally went to the IMF in 1983 against the Nkrumaist principle of not handing over the economy of a sovereign country to neo-colonial Liberal organisations. The Rawlings administration became a standard neo-colonial state.

When after the 2000 elections the NPP tried to build the Nkrumaist tradition, persons like Kwesi Pratt Jnr destroyed it. The NPP unlike the NDC ensured that they supported the Nkrumaist PNC and CPP to win some seats in parliament. The KEEA of Dr. Nduom, the Sissala East and West constituencies are examples. They equally appointed leading members of those parties into key ministerial positions and departmental heads.

Despite these positive gestures from the NPP, the likes of Kwesi Pratt Jnr and Bernard Mornah rubbished it and did everything in their might and strength to not only prevent the Nkrumaist parties from uniting but keeping them in perpetual opposition. These characters were more interested in pushing the NDC into government. Kwesi Pratt Jnr never saw anything good in the Dr. Nduom led CPP. He not only campaigned against them but he equally ridiculed everything they did. Bernard Mornah also rubbished and destroyed the then historic unity pact between the PNC and CPP.