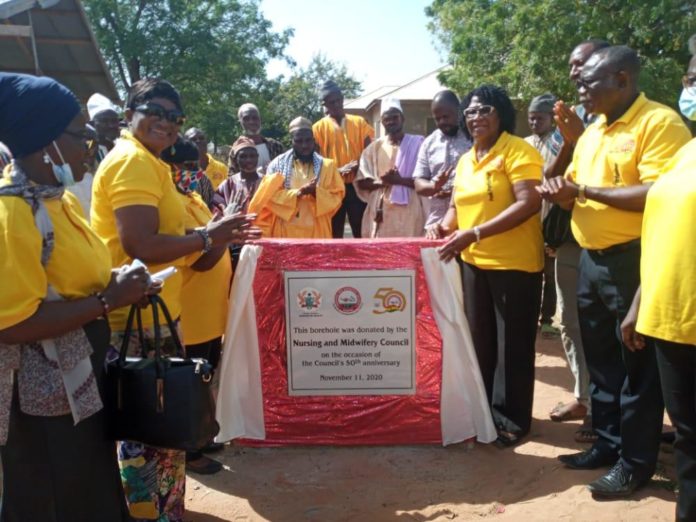 The Nursing and Midwifery Council (NMC) has commissioned boreholes for three communities in the North East Region to provide portable water for residents.

They were constructed at an estimated cost of about GHS39,000.00, with funding from the NMC’s internally generated funds.

Reverend Veronica Darko, Chairperson of the NMC’s 14th Governing Board, addressing chiefs and people of the beneficiary communities, said the construction and commissioning of the facilities formed part of planned activities to celebrate the Council’s 50th anniversary.

She noted that the gesture was also part of the Council’s corporate social responsibility and in line with the Sustainable Development Goals of ensuring that people get access to potable water.

“This year has been declared by the World Health Assembly as the year for Nurses and Midwives and fortunately we are also marking our 50 years anniversary so these projects are part of activities in that accord,” she added.

Mr Felix Nyante, Registrar of the NMC, expressed confidence that the facilities, apart from providing portable water, would also promote handwashing hygiene protocol among residents to help mitigate the spread of COVID-19 in the communities.

Chief Akara Wanimpa Mahamadu, Chief of Sakogu, who spoke on behalf of the people, expressed gratitude to the NMC for coming to their aid with the initiative.

He said water had been a major challenge in the Community as they had to walk long distances in search of water.

“We had to wake up as early as 04:00hours and walk about three kilometres into the bush to get water from a stream. This has come as a big relief for us and our children and we are happy.

“We plead that a lot more of such kind gestures will come to our Community,” he said.

Mr Mohammed Tibila, Headmaster of Nalerigu SHS, thanked the donors for the intervention, and said it came at a time when it was needed most.

He said the project would enhance hygiene and sanitation in the school, and gave the assurance that they would take proper care of the facility to prolong its lifespan.