Safe Democracy Ghana, a constitutional reformation platform for promulgating, assimilating and consolidating culture and democracy in contemporary Ghana extends congratulations to Togbe Afede XIV for being elected the new President of National House Chiefs and outlines the efficiency of the role. 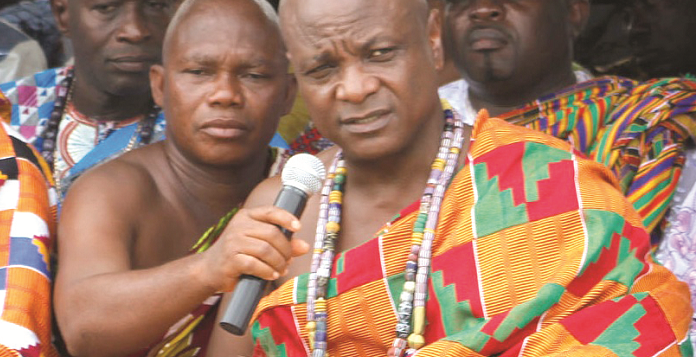 We are enthused your ascension to the Presidency of the National House of Chiefs addresses our desire and advocacy to consolidate Ghana’s culture and democracy for political stability and sustainable economic growth in our homeland Ghana against intricate political desperation associated with the current political dispensation.
We failed as a people to shape and consolidate the Ghanaian culture and tradition into functional political axis for the progress of our democratic enchantment because we had fear to involve traditional authorities, the bedrock of our society in our political discourse because of our parochial interest.

” No constitution can work if it is not understood and experienced by people (and not only the small class of politicians), the participation of the people in the political process, a necessary condition in all constitutional structures, at least in the democratic ones, must in a country like Ghana rely much on the traditional lines of communication and political education” Jenny Goldschmidt,
Traditional Authorities long before the Guggisberg 1925 Constitution have been very influential in conducting communal affairs directly benefiting their localities and we are convinced Your Majesty’s new position as the President of the National House of Chiefs shall rekindle high the hopes and inner intuitions of the chiefs of Ghana for Safe Democracy Ghana is a constitutional reformation platform for promulgating, assimilating their presence to be more felt and their posture rejuvenated and reinforced for sustainable economic development of the people of Ghana.

Safe Democracy Ghana is of the view that in pursuit of participatory democracy and nonpartisan political platform to serve as the highest political authority in the district as District Assembly that shall have deliberative, legislative and executive powers as provisioned under Article 241.3 of the 1992 Constitution, membership to the house needed be all inclusive of all interest groups within the district and that selection of members to the house must include a designated proportion for Traditional Councils to nominate its members to the District Assembly and that the stature of the Traditional Council or the fiduciaries of the land is above consultation in appointing some percentage of members to the District Assembly.
Beyond local government structure, Safe Democracy

Ghana is also advocating for a Second Chamber Parliament that shall comprise two representatives each from each Regional Houses of Chiefs of Ghana of which one shall be female, and representative each from other organizations from within and without the Trade Union Congress to augment activities of the Parliament of Ghana.
In fact Your Majesty, some of the political cacophonies with deep seated ethnocentrism we experience today as a nation are as a result of the Consultative Assembly failure to designate a political office or address sacrosanct positions for Ghana’s traditional authorities in the realm of political administration of Ghana with protruding facts that traditional authorities are astute politicians in their field and they command support of their people noting that they are the overlords of the land that makes Ghana.

“Men are never more offended than when their ceremonies and practices are flouted. Seeking to oppress them is sometimes a proof of the esteem one has for them; flouting their customs is always a mark of contempt.” Montesquieu, Considerations on the Causes of the Greatness of the Romans and their Decline
“No people can profit by or be helped under institutions which are not the outcome of their own character”. Edward Blyden

Your Majesty, we are happy you are here and we are happy with you the people of Ghana would have a strong feel of how our culture and tradition can benefit us socially, economically and politically.

We are looking forward unto having fruitful discussions with you in the very near future on how to disseminate information on Article 39. 1 through 3 of the 1992 Constitution that provided “the framers of the constitution 1992 specifically tasked the state under Article 39.1 – 3 of the 1992 Constitution that “(1) Subject to clause (2) of this article, the State shall take steps to encourage the integration of appropriate customary values into the fabric of national life through formal and informal education and the conscious introduction of cultural dimensions to relevant aspects of national planning. (2) The State shall ensure that appropriate customary and cultural values are adapted and developed as an integral part of the growing needs of the society as a whole; and in particular that traditional practices which are injurious to the health and well-being of the person are abolished. (3) The State shall foster the development of Ghanaian languages and pride in Ghanaian culture.”

These directives are meant and directed for implementation by “the Parliament, the President, the Judiciary, the Council of State, the Cabinet, political parties and other bodies and persons in applying or interpreting this Constitution or any other law and in taking and implementing any policy decisions, for the establishment of a just and free society.” Article 34.1 1992 Constitution; The Directive Principles of State Policy
Thank you very sincerely