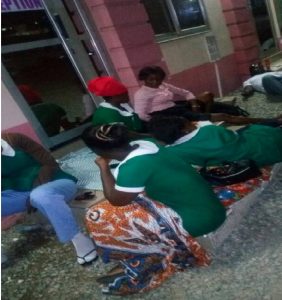 No nurse would want to attend to a patient on the floor because they would have to bend or squat before attending to them, Dr. Nabil Dekpeh, the Medical Superintendent for the Wa Municipal Hospital has said.

He said hospital facilities were compelled to accommodate patients on mattresses on the floor to manage congestion at the facilities.

Dr. Dekpeh said this in an interview with the Ghana News Agency (GNA) in Wa on Thursday on the congestion of the maternity ward at the hospital, which had compelled the facility to accommodate some of the patients on the floor.

“There are two options, either we tell them (the pregnant women) to go back or we give them mattresses to lie on the floor, so we decided to let them lie on the floor. It is done at every hospital when there is congestion”, he explained.

Pregnant women at the Maternity Ward of the Hospital are compelled to lie on the floor due to the congestion of the facility causing a public outcry.

He added that most of those patients who were made to lie on the floor stayed at the facility for less than 24 hours, mostly ten-twelve hours, and were discharged.

Dr. Dekpeh also explained that the congestion was intermittent, saying “there are times that you will see empty beds there (the maternity ward) for about three days or even a week”.

He indicated that the facility still served as a referral centre for some health centres in the municipality even though the new Regional Hospital was operational.

He observed that the new Regional Hospital had come to reduce the burden on the facility as some of the patients were referred to that facility.

Dr. Dekpeh also blamed the congestion at the facility on the inadequate personnel at some of the District Hospitals, which forced those hospitals to refer special cases to the Wa Municipal Hospital.