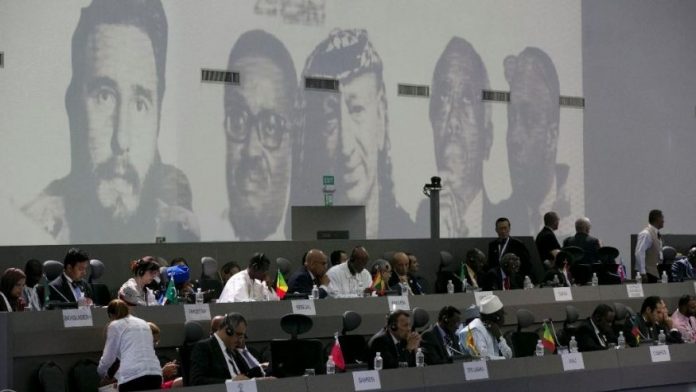 Marking the 55th anniversary of its founding, the Non-Alignment Movement (NAM) held its 17th Summit on Margarita Island in the Bolivarian Republic of Venezuela. This meeting was held under the theme of “Peace, Sovereignty and Solidarity for Development.”

Margarita is the largest island in the Venezuelan state of Nueva Esparta, located off the northeastern coast of the South American country, in the Caribbean Sea. Its capital city of Nueva Esparta, La Asunción, is located on the island. The economic life of the island is based on tourism, fishing and construction.

Over 120 nations were in attendance including many leading heads-of-state who met amid a growing economic and security crisis for oil and commodity producing regions. The host government of Venezuela has lost revenue due to the United States induced overproduction of petroleum resources.

States such as Venezuela, Nigeria, Brazil, Angola, Ecuador, and others are experiencing economic difficulties which in some cases have resulted in political instability. The United Socialist Party in Venezuela is facing profound challenges to its authority by an opposition coalition that is supported by the U.S.

In a declaration issued at the conclusion of the gathering on September 17-18, it said the nations and governments represented were: “Mindful of the fact that the history and reality of the world in which we live in today demonstrates that it is the developing countries of the world the ones who suffer more intensely from the disregard of international law, from invasions, from the ravages of war and armed conflicts, caused mostly by the geopolitical interests of the great centers of power, as well as from protracted conflicts inherited from colonialism and neo-colonialism.”

This section of the declaration reflects the burgeoning crisis of internal and external displacement internationally. According to the statistics released by the United Nations High Commissioner for Refugees (UNHCR), the degree of displacement has reached an unprecedented level. (UN Refugee Agency reports)

An estimated 65.3 million people around the globe have been forced away from their homes in recent years. In this population there are approximately 21.3 million refugees, with in excess of 50 percent being under the age of 18.

In a fact sheet published by the UNHCR it says: “There are also 10 million stateless people who have been denied a nationality and access to basic rights such as education, healthcare, employment and freedom of movement. In a world where nearly 34,000 people are forcibly displaced every day as a result of conflict or persecution, our work at UNHCR is more important than ever before.”

Many of these displaced people are fleeing the Pentagon and NATO instigated wars of conquest and regime-change. In addition, the unsustainability of economic growth in many African, Asian, Middle-Eastern and Latin American states has prompted millions to seek employment in North America and Europe. The large influx of people from oppressed nations into the centers of world capitalism and their satellites has created social tensions that have manifested in electoral politics.

Right-wing governments and political parties have made substantial gains in the industrial states fueling institutional racism, intolerance and violence. Concurrently these nations in Europe and North America are undergoing structural unemployment and a rise in the rates of poverty.

The NAM grew out of the Bandung Conference in Indonesia in 1955. This gathering of 29 countries was a response to the growing threat of world war during the period in the aftermath of World War II, characterized by the U.S. intervention in the Korean Peninsula, the French defeat in Vietnam and the beginning of an armed struggle for national liberation in Algeria. These developments heightened the military and political conflict between the U.S. and the Soviet Union which emerged as the major powers on the world scene.

Liberation struggles, anti-colonial movements and political parties sought to end colonialism and imperialism. The Soviet Union and later the People’s Republic of China sought to ally their foreign policies with the aspirations of the peoples who were seeking to emerge from colonial and semi-colonial rule as well as those who had gained national independence.

By 1961, the need for a more permanent organization came to the fore. In Belgrade, Yugoslavia under Marshall Tito, then a socialist federation, the NAM was formed with leading figures such as Gamal Abdel Nasser of Egypt, Kwame Nkrumah of Ghana, Jawaharlal Nehru of India, Sukarno of Indonesia, as founding sponsors. The decolonization process in Africa was well underway by 1960 and the NAM sought to form a bloc of emerging states within the United Nations.

Over the last five-and-a-half decades NAM has experienced its ebbs and flows. Leadership has been held by various nation-states including Cuba and Egypt. The Islamic Republic of Iran hosted the previous summit in Tehran in 2012.

President Hassan Rouhani in his final report to the NAM 17th Summit emphasized: “What unfolds in the contemporary international order, is worrying if we adopt a realistic perspective. In today’s global relations, hegemonic and domineering inclinations are incontrovertible reality. Alignment towards military polarizations and blocks is another dominant feature in the mentality and behaviors of some of the players. Arms race, warmongering, intensification of conflicts and violence and interfering in the domestic affairs of developing nations by the holders of power and wealth, overtly or covertly, are only examples of such behavior which cannot be interpreted unless with the logic of hegemony-seeking and predominance.” (Iran Times, Sept. 18)

Consequently, in the declaration of the summit in Venezuela it stressed in a separate section that: “the inalienable right of all peoples, including those of non-self-governing territories, as well as those of territories under foreign occupation or under colonial or foreign domination, to self-determination. In the case of peoples who are subject to foreign occupation and colonial or foreign domination, the exercise of self-determination remains valid and essential to securing the eradication of all those situations and ensuring the universal respect of human rights and fundamental freedoms.”

A Broad Range of Agreement

President Robert Mugabe of the Republic of Zimbabwe in Southern Africa called upon the NAM to increase its cooperation in the face of greater threats by the former colonial and existing neo-colonial states. Zimbabwe for the last fifteen years has been subjected to harsh economic sanctions by the imperialist governments in London, Washington and throughout the European Union (EU).

Mugabe, who attended the summit in route to the UN General Assembly in New York, emphasized in his speech that: “Poverty is a threat to international peace and security and the wellbeing of people who are at the center of Agenda 2030. We should therefore continue to speak out against unilateral actions that undermine efforts to address poverty and underdevelopment. Zimbabwe and other Non-Aligned Movement members continue to be targets of unwarranted sanctions from powerful countries who seek to use economic might to impose their will on others. We are grateful for the steadfast support and solidarity from the movement, and expect sustained efforts to have these heinous sanctions lifted.” (Zimbabwe Sunday Mail, Sept. 18)