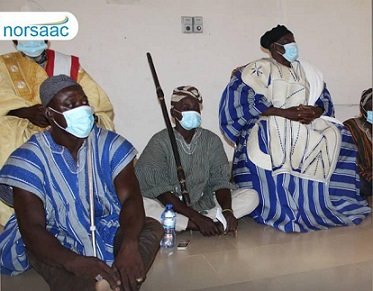 Norsaac, a civil society organisation, has organised a meeting for prominent chiefs in the Tolon District of the Northern Region to discuss issues of child marriages, teenage pregnancies and substance abuse in their respective communities.

The day’s meeting, held at Tolon, was also to gain the support and commitment of the chiefs to help fight child marriages and all its forms in the district including pregnancy induced marriages.

It was also an avenue for the chiefs to reach a common agreement on how best they could contribute to end the issues of child marriage in their respective communities and the district as a whole.

The meeting formed part of the Promoting Adolescent Safe Spaces (PASS) project, being implemented by Norsaac with funding support from the UNFPA-UNICEF Global Programme to accelerate action to end child marriage in Ghana.

The participants included the four Paramount Chiefs, and Divisional Chiefs in the district, as well as representatives from GES, GHS, CHRAJ, assembly members, youth leaders, Adolescents from PASS safe spaces, religious leaders, a queen mother amongst others.

Madam Balchisu Yakubu, outgoing District Chief Executive for Tolon, whose speech was read on her behalf by the Tolon District Coordinating Director, touched on the issue of child marriage, saying it was of concern to the District Assembly.

She said the Community Development Unit of the Assembly had been working hard on issues related to child development in the district and welcomed the meeting as it sought to enhance the development of the child, adolescents, especially girls in the district.

The Chiefs pledged their support to end child marriage in their communities and appealed for support to have a common platform of traditional council where they would enact by-laws to be accepted by all chiefs and implemented to sustainably fight the menace.

According to them, this would ensure that decisions taken would be binding on all chiefs in the areas since all of them would take part on deciding the by-laws.

Major (retired) Sulemana Abubakari, Paramount Chief of Tolon, said to best end child marriage, teenage pregnancy among other issues raised, there should be a committee of district house of chiefs to take critical decisions on the issues to end and or reduce the trend.

He, therefore, appealed to the Tolon District Assembly to support chiefs in the area with a traditional council where a committee of chiefs could hold their meetings.

Chief of Gbrima proposed consensus amongst the chiefs on issues of child marriage, teenage pregnancy amongst other vices, and said a formation of a district traditional council was necessary to help address the situation.