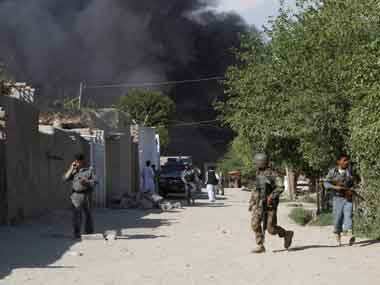 Some five people were killed while seven others wounded in a bomb attack in northern Afghan province of Baghlan on Saturday, the police said.

“A bomb attached to a motorcycle was exploded when an army vehicle was passing a road in provincial capital of Pul-e-Khumir, leaving five passers-by killed,” provincial police spokesman Jawid Basharat told Xinhua.
No army personnel aboard the vehicle was hurt in the blast that took place at around 04:45 p.m. local time.
Among those killed were a child and a woman, the source said, adding the injured were shifted to hospital where two wounded remained in critical condition.
The police blamed the Taliban insurgent group for the attack.
The Taliban has intensified attacks over the past couple of months as the Afghan security forces assumed the full security responsibility from NATO-led troops since Jan. 1.
Nearly 3,700 civilians were killed and more than 6,800 others wounded in conflicts and Taliban-led attacks in 2014, according to official figures released by UN mission in the country. Enditem