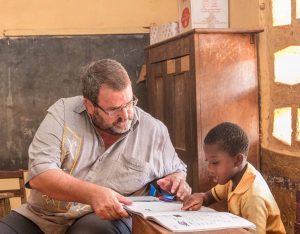 Karas met with the Regional Peace Council in the Upper West Region, where USAID works to promote peace-building, conflict prevention and institutional development. The Regional Peace Council briefed Mr. Karas on their efforts to mediate conflict and to curb post-election violence and vigilantism in the region. Mr. Karas also visited USAID-supported female producers of shea, where he was given a tour of the processing facility and observed how shea nuts are harvested and processed into shea butter. Through the U.S. government’s global hunger and food security initiative, Feed the Future, USAID promotes access for women to land and natural resources to increase the economic development of rural livelihoods.

Mr. Karas participated in a workshop where farmers were trained on the safe use and disposal of agro-chemicals. The training was supported by USAID and organized by Feed the Future, which aims to strengthen agricultural development and increase female participation in local governance. In the Upper East Region, Mr. Karas toured the Duusi Health Centre, where USAID works to improve the nutritional status of infants and young children by training community health workers on the management of malnutrition, dietary diversity and infant feeding practices.

“Earlier this year, in January, only 3 percent of Grade One pupils here could read a single word. Today, 64 percent of these same children can read sentences,” remarked Mr. Karas. “This is a direct result not only of our partnership, but of the commitment and determination of teachers, school administrators, community members—and of course the pupils themselves.”

USAID/Ghana’s work targets the most vulnerable populations in Ghana’s three Northern Regions to enhance agricultural development, boost the incomes of farmers and reduce poverty. Over the life of USAID/Ghana’s Country Development Cooperation Strategy (FY 2013 – 2017), it is estimated that USAID/Ghana will invest over $322 million USD in northern Ghana.