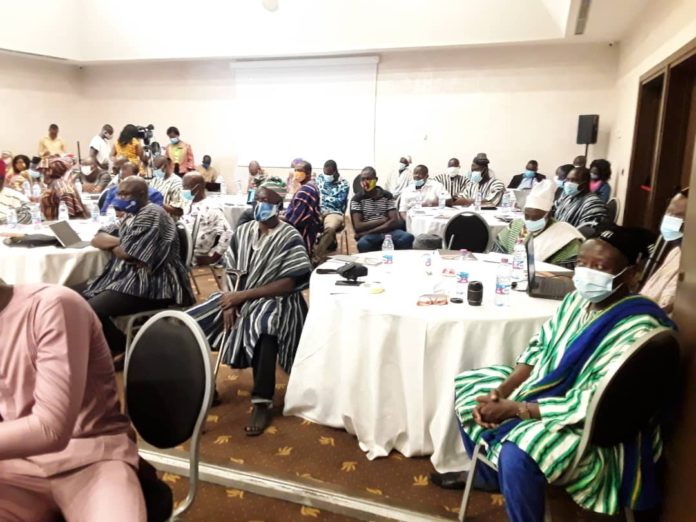 Mrs Mary Chinery-Hesse, the Chancellor, University of Ghana, has said the sustained development and improvement in the quality of life in Northern Ghana was dependent on the collective efforts and contributions of the indigenes of the area.

She said the five regions of the north were lagging in terms of development and yet blessed with professionals and experts who could pool their knowledge and resources together for the development of the area.

I know the importance of many people who can make a difference, the north has produced Presidents, Ministers, and Members of Parliament among other professionals who could work as a pressure group to ensure that in the distribution of resources and development programmes, northern Ghana will get its fair share and beyond,” she noted.

Addressing stakeholders via Zoom in Bolgatanga in the Upper East Region at a Northern Ghana Development Summit, the Chancellor noted that when a Development Plan of the North was developed and owned by the indigenes, there would be sustainability in the development drive.

“I sense frustration, I would plead that we make those frustrations positive by mobilizing to ensure that the rhetoric of talking all the time about the need to breach the existing gap between the north and the south is given action and not just talk. What we need right now is to ensure that we see to it that the implementation of the many good ideas would take place,” she noted.

Speaking on the topic “Narrowing the North-South inequalities: what needs to be done,” Mrs Chinery-Hesse explained that although the north was robbed through colonialism, it was high time the people made a paradigm shift from hoping for reparation to coordinating their efforts together irrespective of their political ideologies to secure their destiny.

She said Northern Ghana was endowed with rich with natural and economic resources that had the potential of propeling aggressive socio-economic growth and position it to play an effective economic linkage between Ghana and the Sahel countries.

She stated, for instance that the potentials of the abundant shea could be harnessed by adding value to the raw materials and constructing reservoirs to harvest the abundant water sources during the rainy season for both agriculture activities during the dry season and generation of hydroelectric power.

The Chancellor noted that the Sahel with its population of about 350 million presents a big economic prospect for Ghana and underscored the urgent need for more resources to be channeled towards developing the north, adding that it would further change the paradigm of migrating from the north to south in search for greener pastures to migrating from the south to north.

Bo-Na Professor Yakubu Nantogmah, a Member of Council of State, who spoke on the theme, “Transforming the economy of Northern Ghana within the context of the 2020 general election and COVID-19 pandemic,” identified abandoning of development projects as major hindrance in the north and stressed the need for politicians to ensure continuation of projects for improved livelihoods.

The programme, which brought together stakeholders including; Regional Ministers or their representative of the five regions of the North, Metropolitan, Municipal and District Chiefs, traditional authorities, among others was organized by the Northern Development Authority (NDA) with support from STAR-Ghana Foundation, TAMA Foundation Universal and the Northern Development Forum.

The Summit was to bring development experts together to chart the way forward for the sustained development and progress of Northern Ghana, reduce poverty and improve the quality of life of the people.