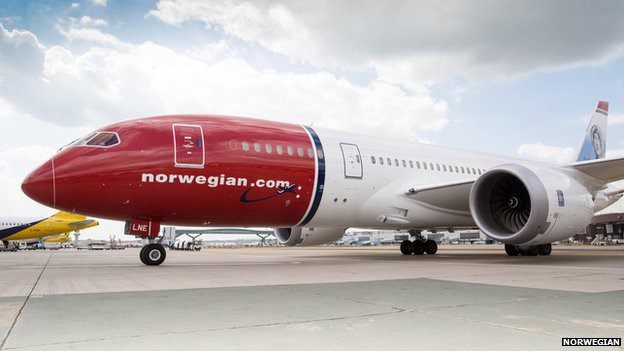 A Norwegian direct airline service to Los Angeles has revived hopes for a budget long-haul market.

Over the next two days it will also start flying twice a week from London to Fort Lauderdale and three times a week to New York.

Norwegian made its first foray into long-haul in 2013 with routes from Scandinavia to the US and Thailand.

Norwegian says that some low season flights can be had for as low as ?179 ($272) one-way to New York, however only a limited of seats are available at this price.

On Wednesday, Norwegian’s website was offering flights in the height of the holiday season in July and August from ?329 to ?647.

But the service, run from a new company called Norwegian Air International (NAI) in the Republic of Ireland, has been heavily criticised by US airlines and labour unions.

They say NAI is using Ireland because of its more flexible labour laws.

The Air Line Pilots Association (ALPA) said the creation of Norwegian Air International “was clearly designed to attempt to dodge laws and regulations, starting a race to the bottom on labour and working conditions”.

Among their complaints is NAI’s use of pilots and crews from Asia to drive down costs.

Norwegian says that it always respects the regulations of the markets in which it operates and says it is hiring 300 American cabin crew and New York-based pilots for its 787 Dreamliner operation.

It said in a statement that NAI was based in Ireland to “access to future traffic rights to and from the EU (Norway is not a member of the EU)”, and because being registered in Ireland gave it access to more flexible rules on financing.

Norwegian has planned its long-haul business round fuel-efficient aircraft. It has a fleet of 787 Dreamliners with four more due for delivery before the end of 2014.

If the Norwegian long-haul budget model works it could have far reaching consequences for the development of travel and how airports are used.

The new generation of fuel efficient aircraft could mean more passengers flying “point-to-point” rather than via large hub airports such as Heathrow, Schiphol or Charles de Gaulle.

There is an argument that these new routes are so significant, they could change the course of the runway debate in Britain.

Right now, Gatwick and Heathrow are in the middle of a dog fight over who should be allowed to expand.

Gatwick reckons that a low-cost carrier offering long-haul flights is a sign of the future. A future where more of us fly directly to our destination, rather than transfer via a big, hub airport, like Heathrow. In which case, they argue, we might as well build the new runway at Gatwick because it’s cheaper and far fewer people will suffer from the extra noise.

But there’s a snag here. This all seems to assume that the low-cost carriers are desperate to start flying us to the States, or to those gold rush cities in Asia and South America.

Yet Gatwick’s biggest customer, Easyjet doesn’t agree. Their boss, Carolyn McColl, told the BBC only last month: “We have no intention to do long-haul because we think it’s a different kind of business.”

She also said it was “high risk” to change the airline’s short-haul strategy.

The man leading the Airports Commission, Sir Howard Davies, once told me that his most important and most difficult challenge was to predict how we’ll all be flying in the future. Will we use hubs or will we fly direct? His answer could determine who gets the next runway, but we won’t hear it for another year.

Long-haul budget airline travel started some 30 years ago with Britain’s Sir Freddie Laker and Skytrain. His venture went into liquidation in 1982, hit by recession and cut-price competition from the big airlines.

In 2007, Malaysian music executive Tony Fernandes tried again with AirAsia X flying out of Kuala Lumpur. But five years later he was forced to pull out of the flights to Delhi, Mumbai, London, and Paris, saying he had been caught out by high fuel prices, taxes, and weak travel demand.

Norwegian’s main market is across Europe, North Africa and the Middle East. It carried 2.1 million passengers in May, an increase of 12% compared with the same month last year.