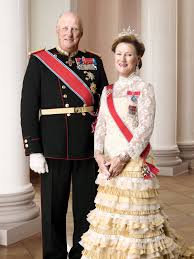 The royals were to be accompanied by Foreign Minister Borge Brende and Monica Maeland, minister of trade and industry as well as a delegation of Norwegian businesses during the December 1 to 3 visit.

Maeland was on the eve of the arrival of the king to visit a local market along with the head of Norwegian telecommunications group Telenor, Jon Fredrik Baksaas, to discuss the role mobile telephones play for ordinary people.

Maeland said in a statement there were “good contacts” between authorities in Norway and Myanmar: She said her focus was on how Norwegian firms can build infrastructure, use natural resources in a sustainable manner and contribute to a good development in Myanmar.

Myanmar President Thein Sein visited Norway last year. He is credited with introducing political reforms that have restored diplomatic ties with the West.

During that visit she delivered her Nobel lecture as she had not been allowed to travel to Norway in 1991, the year she won the Peace Prize.