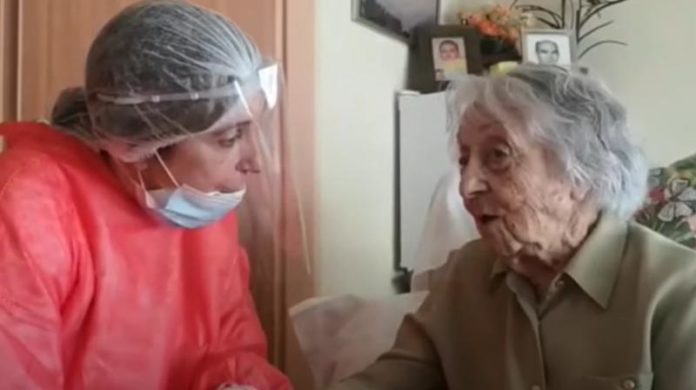 Pan Maoyuan is just like any other teacher at Xiamen University except for his age: He is 100.

“If I were to live life twice, I still hope to be a teacher,” Pan said ahead of China’s Teachers’ Day that falls on Thursday.

As one of the founders of China’s higher education, Pan has nurtured 326 PhD candidates and 759 master’s students in more than 40 years.

“FAILURE IS THE MOTHER OF SUCCESS”

At 15, Pan took up a part-time job as a teacher at a private primary school in the city of Jieyang, south China’s Guangdong Province.

“The students in my class were aged from five to 15. They were very naughty. When I turned to write on the blackboard, they threw chalks at each other. When I read from the textbook, they did not pay attention but talked to create disorder,” Pan recalled.

The frustrating experience of being a teacher did not hold him back. Instead, he was determined to overcome the odds and become a “real” teacher. “Failure is the mother of success,” he told himself.

Then Pan entered a secondary teachers’ school, taking a lot of education courses to make himself qualified for the position of a teacher. He was finally enrolled in Xiamen University in 1941 and chose education as a major.

In the college years, Pan revisited his teaching dream by working part-time in local primary schools. He allowed students to soak in nature in the outdoors rather than keeping them confined in the classroom for essay writing. He also borrowed specimens from his university and took them to the zoology class.

“Pupils were always curious about what I would take to them. Many years later, one of them became a well-known ichthyologist,” he said.

With vast teaching experience, Pan found fame in Xiamen, an eastern Chinese city where his university is located. However, he tasted failure again in the 1950s.

“YOU GAIN BY GIVING AWAY”

In the mid-1980s, Pan hosted a weekend academic salon every Saturday evening. He received his students at his apartment, talking about topics as varied as education to life.

“University is not only a place where you can gain knowledge but also a place that can nurture you silently with its academic atmosphere,” Pan said.

For Pan, a quality teacher is a caring teacher who loves his or her students. His students often called him or visited him even after graduation.

Pan also believes that every student is equal. “Students may differ in abilities. Some may have the aptitude for vocational schools, while others may be suited to research at universities. All of them are absolutely necessary for society,” he said.

Due to the COVID-19 epidemic, Pan gave his first online lecture in life in June this year. More than 30,000 teachers and students across China joined the one-hour class.

“I was not satisfied with the online lecture,” he said. “Students could see me, but I could not see them. Eye contact is very important in communication and it is true for a class too.”

Pan, the oldest working teacher in Xiamen University, celebrated his 100th birthday with his colleagues and students on August 4.

“The most gratifying thing in my life is that I am a teacher,” Pan said. “As a teacher, you gain by giving away.”