Dr Mrs Naa Asheley Dordor, Chief Executive Officer of the Nova Chiropractic Health Centre at Adenta, has said it was important to have spine checks to avoid frequent ailments.

?Since the spine is the structure of the nervous system it is important to make sure that at all times the spine is subluxation free by going for checks,? she said.

Dr Mrs Dordor said: ?subluxation is when one of the spinal bones goes out of its normal alignment and puts pressure on a nerve. It is a silent killer because there is no way you can feel it.?

Dr Mrs Dordor, Chiropractic Physician, was speaking to the Ghana News Agency in an interview when her Health Centre at Adenta in Accra organized a free chiropractic screening for the people within and outside the community.

The screening formed part of activities to mark World Spine Day which fell on October 16 that coincide with the one year anniversary of the health facility.

As part of the one year anniversary the Health Centre donated items such as rice, milk, soap, cloths, gari, bread and fruits and 1,000 Ghana cedis to the Weep Not Child Orphanage at Nsawam.

Dr Mrs Dordor said anybody, from infants to the elderly could benefit from chiropractic care.

She said the first time one could get misalignment of the spine was at childbirth and added ?the birthing process can be very traumatic and right at that early age several subluxations can cause many health problems.

Dr Mrs Dodoo said the best time to receive chiropractic treatment was during the developmental stages so that the child could grow up in the right way.

She said the middle aged needed chiropractic care because they had daily stressors at work and at home that could compromise the spine.

Dr Mrs Dordor said ?the elderly are prone to falls due to loss of balance which comes with aging so chiropractic is essential for them as well to help with coordination and other problems.?

Dr Mrs Dordor advised that people should be careful in the way they position their bodies while sitting and lying in bed, and avoid carrying and lifting heavy loads.

She said school children should not be allowed to carry heavy load of books in their bags and hang them on their shoulders and backs which serves as recipe for spinal problems.

She said chiropractic treatment is a natural use of hands to correct spinal problems without drugs and asked those who have such health challenges to see chiropractors to solve them.

Committee orders Medical Superintendent and Accountant to proceed on leave 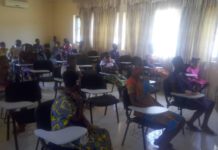