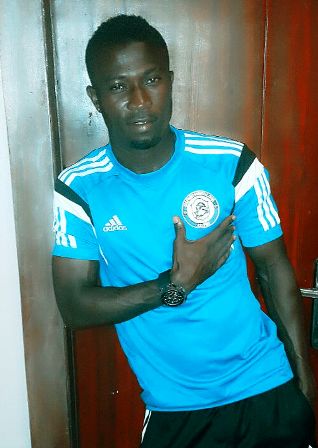 Godbless Asamoah scored a brace as Dolphins renewed hope of escaping relegation with a 3-1 win over relegation threatened side FC Taraba at the Liberation Stadium in the Glo Premier League on Sunday evening.

Omo Johnson was also on target with a sublime finish.

Bishop Onyeudo would pull one back for the visitors late in the game but the harm was done already as the 2011 Glo Premier League champions ran away 3-1 winners on the day.

Placed 18th and 19th with two points separating them prior to Kickoff, both teams knew their survival bid would surely be aided by getting one over fellow strugglers hence the slow, pragmatic start of the first quarter of an hour.

But out of nowhere and with the first decent shot on target, Dolphins took the lead. A tackle on Isiaka Olawale freed the ball to striker Omo Johnson, who fired one time at goal with a vicious strike. The FC Taraba keeper reacted but not quickly enough, as he was powerless to stop the ball from hitting the back of the net.

The goal seemed to awakened the visitors who being limited to hopeful crosses and long range strikes at goal by the Dolphins defence, could not force Rotimi Sunday to any decent saves. Abdulrahman Isah and Kingsley Salami got shots on target but they produced routine saves from the veteran keeper. The first half would end with the visitors in control but Dolphins having the lead.

FC Taraba began the second half a lot better but again and again the final ball was wanting. Bishop Onyeudo released Stephen Adah ten minutes after the restart with a lovely ball but the attacker struck wide. Haliru Hashimu was next to go close for the Jalingo-based side with a strike from outside the box but it sailed inches wide.

Barely hanging on and indeed looking out of sorts, Dolphins needed a cushion for their slender lead and yet again it was striker Omo Johnson who came to the rescue in the 70th minute. Chasing onto what could be termed a lost cause, he disposessed a defender, eased pass him and galloped down the right. Driving into the box, he spotted and subsequently squared for an unmarked Godbless Asamoah who simply tapped home from four yards doubling the lead.

The now deflated-looking visitors would yet again switch off at the back seven minutes later, allowing Asamoah who was making a return from a lengthy injury layoff to convert yet another ball from the right.

FC Taraba however did get a consolation in the 85th minute after Chigozie Ihunda handled a ball in the area and Bishop Onyeudo sent the keeper the opposite way from the resultant spot kick.

The muted celebrations that followed from the visitors were more than just because of the empathic score line, but for the reality that time was indeed running out on their relegation survival hopes.

Farmers who are marginalised at Ejura get support to boost livelihoods