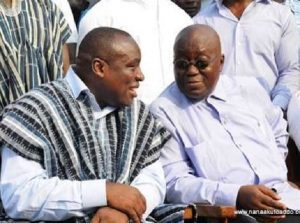 President Nana Addo Dankwa Akufo-Addo’s attempts to appoint suspended General Secretary of the New Patriotic Party (NPP) in his administration have been blocked by some high profile elements of the party.

Our checks revealed the president was keen to have the trained engineer among his ministers, but party power brokers insisted that Kwabena Agyapong should be left to wallow in political wilderness.

The General Secretary was suspended for violating Article 3(D) of the party’s constitution which enjoins members to publicly uphold the decisions of the party, through various acts.

He was also accused of engaging in unilateral actions and activities without consultation of, or authorization by other party executives.

However, Mr Agyepong argues the charges leveled against him were unfounded.

We understands the president and his Chief of Staff, Fremah Osei-Opare are open to the idea, but party hardliners are not keen on the prospect of Mr Agyapong working in the administration.

Source at the presidency said President Akufo-Addo received a humiliating rebuff from some of his appointees when he first told of his intention.

“The president was taunted by his own appointees and party executives at the meeting when he made his intentions clear to them. Their reaction was unanimous. Others even forgot that they were talking to the president and shouted at him in outright rejection of his suggestion,” our source who pleaded for strict anonymity said.

The president planned to appoint Mr Agyapong as Sports Minister, considering his depth of knowledge in the sector.

TDCL grateful to president for their MCE