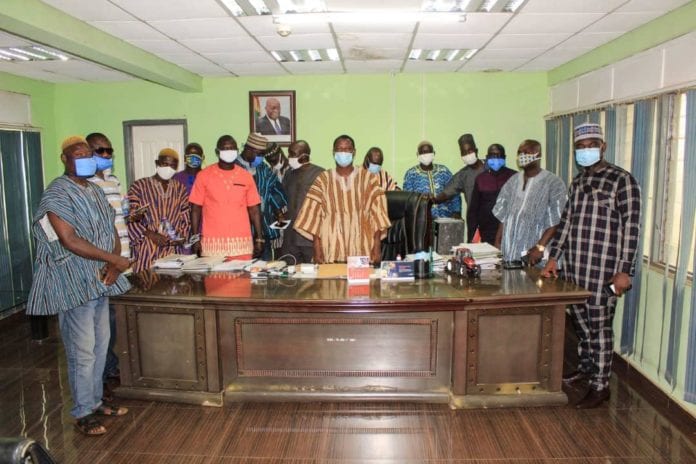 The Northern Region branch Chairmen caucus of the New Patriotic Party (NPP) has presented a letter of appreciation to the Management of the Northern Development Authority (NDA) for initiating projects in fulfilment of the President’s promise to the people.

The presentation was done when the group paid courtesy call on the Chief Executive Officer (CEO) of the NDA at his office in Tamale on Thursday to congratulate him on his appointment and his display of leadership with the swift award of contracts for the execution of projects under the Infrastructure for Poverty Eradication Programme (IPEP).

So far, over 500 projects such as classroom blocks, mechanised boreholes, roads, dams, electrification, clinics and hospital wards have been initiated at all the constituencies in the Region.

Mr Mohammed Ibrahim, Chairman of the group, said “The organisation you now lead has been seen in a bad light for a long time before your appointment.

It is therefore, commendable under the circumstance, that you have been able to speed up the process of awarding contracts for the IPEP projects. This has been long overdue and we are glad that you appreciate the urgency of the times and the relief it will bring to the Region”.

Mr Ibrahim added, “It is our hope that you continue to lead NDA to deliver sustainable development to northern Ghana. We want to assure you of our unflinching support to get this done and also pledge to do our part to monitor the projects to a successful completion so that NDA and Government will regain the confidence of the people in the region”.

The group also applauded the NDA for the active involvement of the media and wide publicity in the handing over of projects, adding that it had increased the visibility of the NDA and its work.

Mr Ibrahim noted the active involvement of Chiefs, Metropolitan, Municipal and District Chief Executives, Members of Parliament, Regional Coordinating Council and other key stakeholders in the Region would foster unity for the sustainability of the projects.

Dr Alhassan Sulemana Anamzoya, CEO of NDA, for his part, thanked the group for the encouragement and expressed his excitement about its involvement in ensuring that the Authority succeeded in the execution of the IPEP projects.

Dr Anamzoya pledged his commitment to overseeing the successful completion of the projects, adding that the success of this phase of the IPEP would determine whether or not government would continue to allocate funds to provide infrastructural development across the country.

He urged the group to treat the projects as their own and help to monitor and safeguard them to ensure they benefited the people once people chose the projects themselves.

Mr Stephen Yir-Eru Engmen, Deputy CEO of NDA in-charge of Programmes, also thanked the group for the visit and encouraged them to continue to support the work of the NDA.

He further encouraged them to propagate peace to their constituents, adding that in the absence of peace, development interventions would come to a standstill.