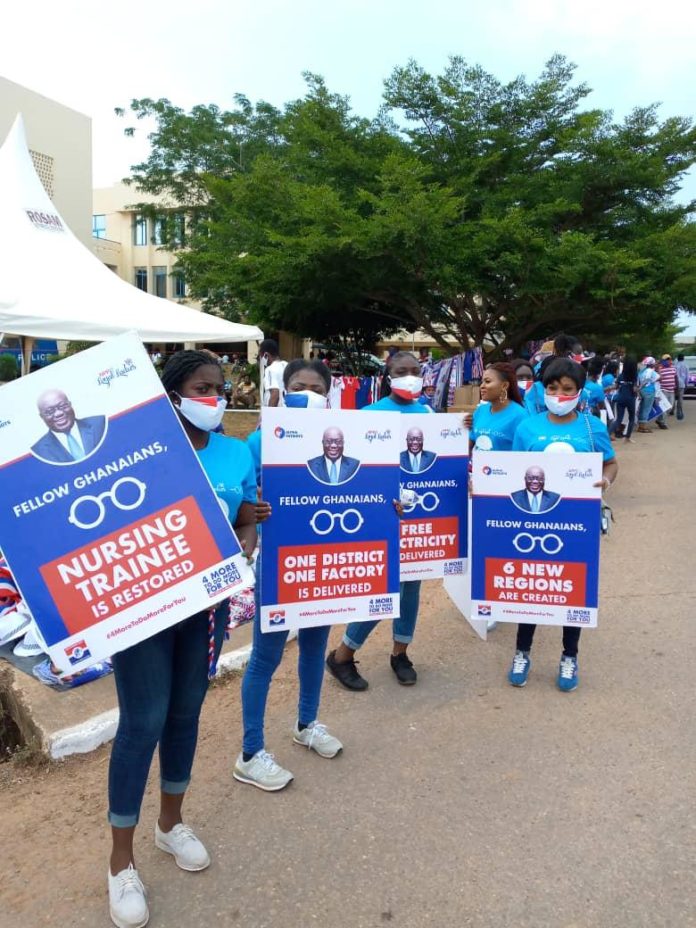 The governing New Patriotic Party (NPP) on Saturday launched its election 2020 manifesto with a promise to provide a leadership of service to transform the country forever.

The launch which was on the theme “leadership of service, protecting our progress, transforming Ghana for all” brought together the rank and file of the party including; the Vice President, Dr Mahamudu Bawumia and his wife Mrs Samira Bawumia, the Chief of Staff, Madam Frema Opare and Majority leader, Osei Kyei Mensah Bonsu among others.

The President Nana Addo Dankwa Akufo-Addo in his address said the party spent a lot of time consulting broadly, guided by the Party’s core values to draft a manifesto that would unearth solutions to the country’s myriad of socio-economic challenges.

According to him, the manifesto presented solemn social contract between the electorate and the elected candidate which must translate into progress.

President Akufo-Addo was proud policies and programmes his government implemented were felt at every corner of the country stressing that, the NPP had provided value for money leadership for Ghanaians.

He said due to implementation of prudent economic measures, the once tattered economy was back on its wheel with strong economic fundamentals spurring economic growth and development.

He said though the COVID-19 had temporally slowed the momentum, it could not divert the attention of the government from the path of progress.

On education, President Akufo- Addo took pride in the fact that free SHS and TVET had been delivered successfully and that the education of Ghanaian children would not be abruptly truncated due to financial difficulty.

He acknowledged the fact that the free SHS policy was not easily implemented and as such the next NPP administration would do all that it could to protect and prevent the NDC’s so-called review which he said meant cancellation.

“It was not easily done and so we intend to protect is and prevent any so-called review, another word for cancellation”, he said
He said Ghanaians could not afford entrusting the free SHS and TVET in the hand of former President Mahama and the NDC because their so-called progressively free education was not properly done.

“We have no reason to believe the NDC’s presidential candidate’s newly proclaimed conversion to free SHS and TVET. For eight years, he and his party were lauded in their assertions that they did not believe in free SHS and TVET”.

“They did not like the idea, they rubbished it at every single opportunity, proclaiming that it will destroy Ghana’s education system”.
Similarly, he said Ghanaians risk entrusting the country’s agriculture in the hands of the NDC and its president because they would ultimately leave farmers on their own without the support to make them prosper.

Giving lightweights of the manifesto, Vice President Mahamdu Bawumia said the next administration of the NPP would abolish the guarantor system of seeking student loan and that students would use national ID card as the key legal requirement to access the loan.

He said they would expand access to legal education and complete free Wi-Fi services for SHS and public universities for their studies.
On Housing, the Vice President said government would set up a National Rent Control Assistance Scheme as a means of easing the financial burden on low income earnings.

He said a seed capital of hundred million Ghana cedis would be allocated to support the scheme for a start as they work to digitise rent control and pass the rent act to ease the accommodation challenges.

Other Ministers of state and Members of Parliament took turns to address the gathering and called on Ghanaians to vote for the NPP.