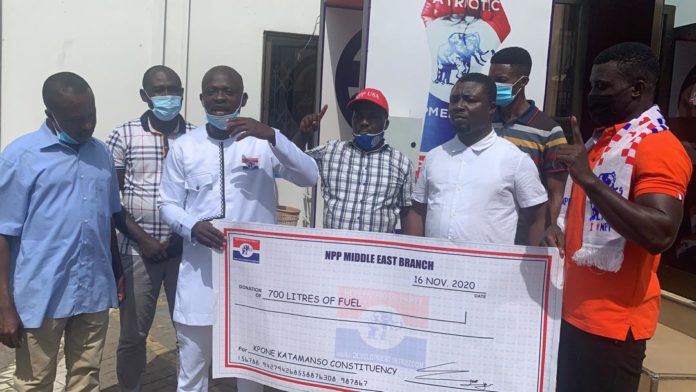 The Middle East branch of the New Patriotic Party (NPP) has donated 1200 litters of fuel to two constituencies to support their campaign ahead of the 2020 general elections.

The two constituencies are Kpong-Katamanso in the Greater Accra Region and Zibila in the Savanah Region.

Presenting the fuel coupons to executives of the two constituencies at the party’s headquarters in Accra yesterday, the chairman of Middle East branch, Mr. Isaac Osae asked the executives to work hard to retain the party in power.

He said the 1200 litters of fuel is their contribution towards the party’s victory come December 7, 2020.

Mr Osae also used the same platform to advise the rank and file of the party to ensure maximum security at the various Polling stations before, during and after voting.

“We don’t have to lose sight of security even in a second especially on the voting day for any group of people to distract the elections,” the chairman of the Middle East branch cautioned.

Representatives of the two constituencies who took the coupon on behalf of the parliamentary candidates thanked executives and members of the Middle East branch for their timely support.

They promised to use the fuel for the purpose for which it was given.