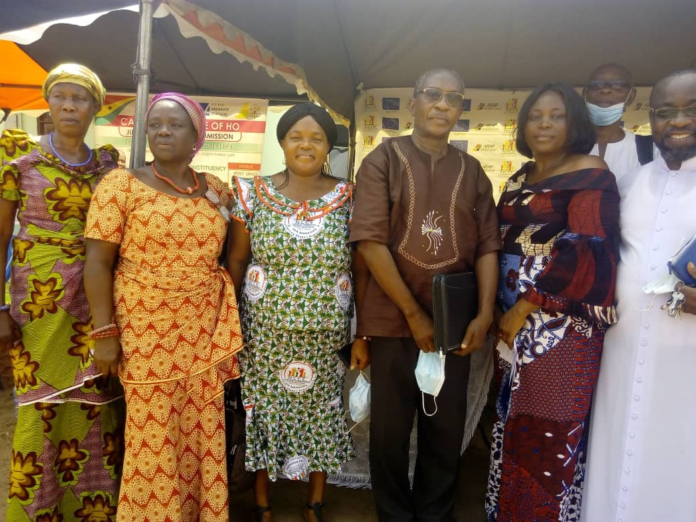 The Parliamentary Candidate of the National Democratic Congress (NDC), Madam Angela Oforiwaa Alorwu Tay was the only candidate present at the programme, which was to give the three Parliamentary Candidates within the District the opportunity to answer questions on the concerns of the electorates within the Afadjato South District based on research findings by the NCCE.

Messrs James Etornam Flolu and Bankas Yao Kumah Edem are the NPP and NDP Parliamentary Candidates respectively.
The Candidates were to answer questions on six important areas of the economy, namely: Education, Health, Employment, Agriculture, Corruption and Roads and Infrastructure.

Mrs. Helen Amankwah, District Director NCCE, Afadjato South said though she appreciated members of the Community for honouring the programme, she was disappointed the Parliamentary Candidates of the NPP and NDP were absent.

Mrs. Amanakwah asked the electorate to follow laid down measures by the EC in conducting a credible and peaceful election and urged them to eschew violence.

Madam Angela Oforiwaa Alorwu Tay, Member of Parliament and also NDC Parliamentary Candidate, Afadjato South assured of the provision of quality health care to the people as development of a community depended on the health of the indigenes.

She also said some youth in the District, who aspired to gain skills in vocation were given the necessary training to achieve those goals and bemoaned the idea of farming being a source of punishment rather than an avenue to make a living.

She said she would organise an orientation exercise on the economic and financial benefit of farming to the youth and the NDC would reduce subsidies on fertilizer to improve production.

He said the Service would not countenance any form of violence and called on all stakeholders to play their roles responsibly and security officers that would be deployed on Election Day would wear name tags for easy identification.

He prayed for peace beyond the elections. Mr Steve Koku Salakpi, Coordinator, Ho Diocesan Justice and Peace Commission educated the gathering the role of the MP, the Local Authorities and Participatory Governance for Community Development.