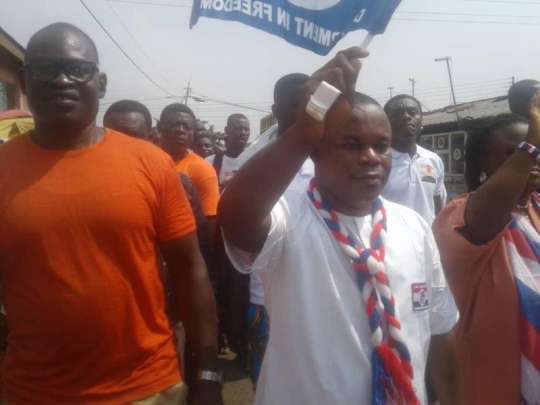 Nii Okine who last Saturday picked his nomination form to contest the Party’s primaries on April 25, said Mrs. Quaye who is also the Minister of Fisheries and Aquaculture Development had failed to deliver, especially with regard to provision of jobs.

He was accompanied by a crowd of Party supporters amidst brass band music and dancing, marching through some principal streets of Nungua from his house in Buade.

Nii Okine, an entrepreneur and building contractor, told journalists after picking the nomination form at the Party’s Constituency office at Nungua that he had employed 70 people in the Constituency.

He promised to assist his constituents to develop entrepreneurial skills when given the nod.

“We have a lot of artisans in the Constituency, therefore, I will make sure every artisan receives support to expand his or her business so that they can employ others,” he said.

On measures to address the sanitation challenge in the Krowor Municipality, he promised to set up a committee to effectively supervise Sanitation Officers.

He also pledged to ensure that unity prevailed among the constituents and that he would continue with the uncompleted developmental projects by his predecessors when voted into power.