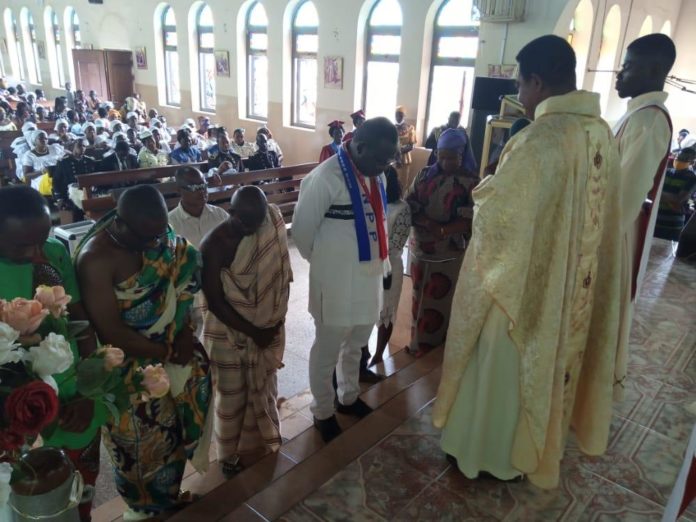 Some of the churches he visited to worship include; the Calvary Methodist Church, Bibiani, Anglican Church, The Church of Pentecost, Bibiani Central Gospel Church and St. Teresa’s Catholic Church Bibiani.

The objective of the visit was to among others introduce his himself to the congregation and seek divine guidance and protection before, during and after the December Elections.

Mr Obeng appealed to the various congregations to re-elect President Akufo-Addo for the second term and give him the opportunity to serve them in the capacity as the next Member of Parliament for the area.

He hinted that, aside the numerous social intervention policies and programmes rolled out by the NPP government, Free Senior High policy was pivotal in accelerating development of the nation, particularly the rural Communities.
He said the Free Senior High policy has brought a level playing field for students from both affluent and poor backgrounds.

Mr Obeng indicated that, among the four Parliamentary aspirants in the Constituency he stood tall in terms of Age, working experience, academic qualification, ability to give support to the constituency, and should be given the nod come December 7.

He also admonished the youth to desist from acts that would derail the peace of the country before, during and after the Elections.

The Parliamentary Candidate told the congregation to be wary of the ‘Skirt and blouse’ mantra which is being preached by the opposition members.

Prayers were said for the Parliamentary Candidate and his team for God’s protection, guidance and directions in all their endeavours.