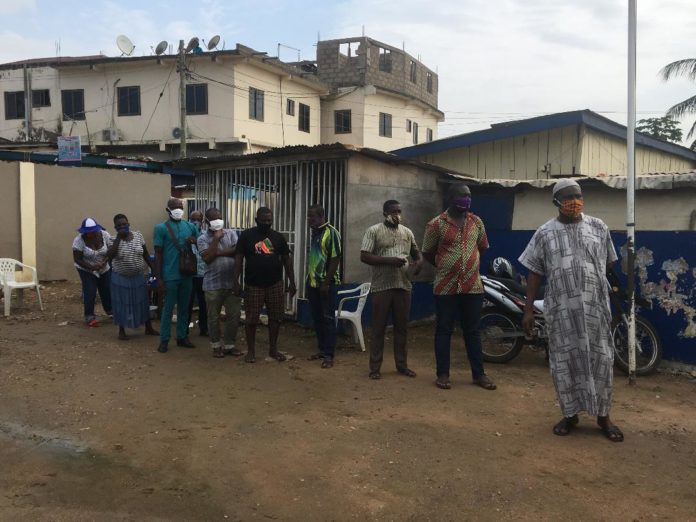 The governing New Patriotic Party’s (NPP) parliamentary primaries at the Okaikwei North Constituency has been smooth and peaceful.

At the Akweteyman Electoral Area (Asiamah School), delegates were seen standing in a queue and waiting patiently to be called over to be taken through the electoral process.

Out of a total of 92 delegates expected to vote there, 59 had successfully cast their votes as at 0851hours.

Security personnel from the Ghana Police Service were on the grounds to maintain law and order.

The contest for the parliamentary ticket is a straight battle between Mr. Fuseini Issah, the incumbent Member of Parliament (MP), and Mr. Kenneth K.A Kuranchie.

Mr. Nathaniel Howard, the Presiding Officer for the Akweteyman Electoral Area, told the Ghana News Agency (GNA) said voting started at exactly 0700 hours and there had experienced no distractions.

He described the turn out as impressive and said he was expecting a 100 per cent turn out by close of polls.

Mr. Howard said there was transparency and order at the Centre.

Things were not any different at the Nii Boiman Electoral Area (Immaculate Conception School) – there was calmness and the turn-out was good.

Mr Courage Degenu, Presiding Officer, said the only difficulty they had faced was that some delegates came in without nose masks and had to be asked out of the premises.

“Aside this, the whole exercise has been a good one. We are not in ordinary times, as such, polls will close at 1300 hours, earlier than the usual 1700 hours that polls end in the country.”

“Therefore, I urge all delegates to come in their numbers and not wait for the last minute before they troop in to cast their votes”, he added.

GNA also observed that all the COVID-19 safety protocols were been followed to the latter.

All delegates wore nose masks, observed social distancing and were made to wash their hands at the entrance.

Also, at the Presiding Officer’s table, each delegate was made to clean his or her hands with a hand sanitizer before going through the electoral process.

Can the broken NPP be fixed?