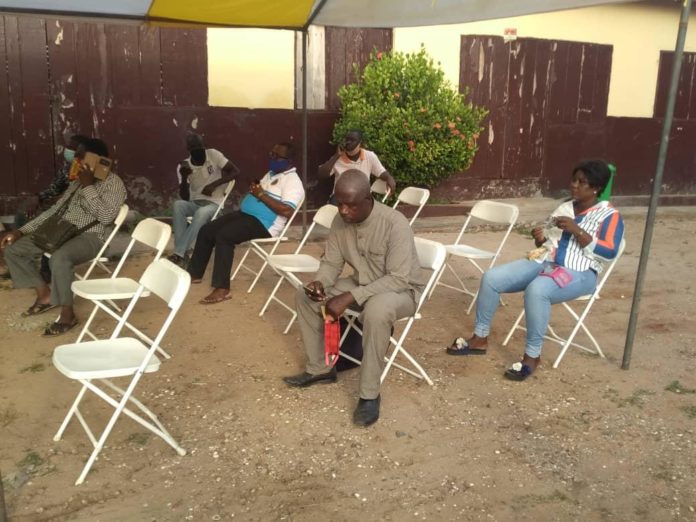 Voting delays at the Kwashieman Electoral Area in the Ablekuma North constituency in the ongoing parliamentary primaries of the New Patriotic Party (NPP) due to dispute over the eligibility of the Electoral Album.

The Party announced that voting would start at 0700 hours and end at 1300 hours, but due to the misunderstanding, voting started at 0920 hours.

However, he said, when the EC officials were getting ready to start voting this morning, the Regional Directorate of the NPP informed him that there was a problem with the Kwashieman Electoral Register and asked him to withhold voting until it is resolved.

Mr Opoku said he received a new Electoral Album after 0800 hours and brought it to the polling station for the election to start, hence the delay.

Responding to a letter signed by Mr George Nkrumah, the Ablekuma North Chairman of the NPP, indicating the suspension of six polling station executives in the area, Mr Opoku said, the NPP Regional Directorate told him that the issue of their suspension is still pending, therefore the affected persons could still vote.

Mr Abdallah Sharif Larry, the Presiding Officer at Chris Mission polling station told the GNA that, there are 140 names on the electoral register.

He said only voters with Ghana card or Voter ID cards would be allowed to vote because the EC would not accept party accreditation.

Meanwhile, the NPP constituency officials provided Veronica Buckets with water, liquid soap and alcohol-based hand sanitizers for use in compliance with Covid-19 hygiene and safety protocols.

The EC officials and the police asked all delegates to wash their hands and wear nose masks before entering the precinct of the polling station.

Not more than 100 persons were allowed to the polling station.

Voters waiting to cast their ballots were provided with chairs under canopies.

Alhaji Abubakari Braimah, the Constituency Youth Organizer of the Party, said no delegate would be allowed to carry his/her mobile phone to the enclosed screen as instructed by John Boadu, the National General Secretary, to prevent any delegate from taking pictures of his or her ballot.

He added that polling agents without party accreditation would not be allowed to observe the election.

Four parliamentary candidates are contesting to win the sole ticket to represent the NPP in the December 7 Election.

In all, 102,000 delegates are supposed to vote in 99 constituencies today nationwide, but the election is taking place in 168 constituencies with sitting members of Parliament since some MPs are being endorsed through acclamation.

Sixty-five MPs are going unopposed across the country.

The delegates eligible to vote in the primaries include Party Elders, Constituency Executives. Polling Station Executives, Party Coordinators, and Founding Members of the Party.