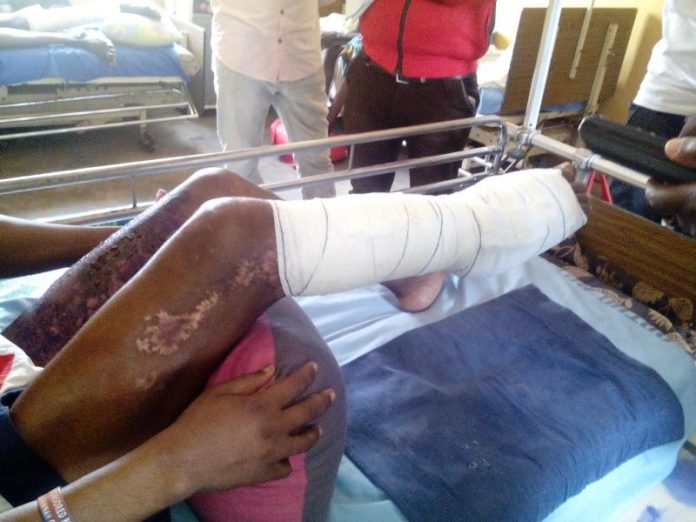 Ultimate News has learnt that a 34-year-old staunch supporter of the ruling New Patriotic Party (NPP) who reportedly had one of his legs crashed by a pickup during a campaign rally at Bawku in 2016 has been abandoned to his fate.

Hardi Akalifa, a father of two girls, is into his 6th month at the Bawku Presbyterian Hospital, confined to a bed after a tissue of his left leg was removed and transplanted to the affected leg to replace the protective covering of skin lost in that gory accident.

The auto crash came whilst plainspoken lawmaker, Kennedy Ohene Agyapong, was addressing a rally at the campaign launch of the NPP’s parliamentary candidate for the Bawku Central Constituency, Agbanwa Gabiana Abugri, on Saturday November 5, 2016.

Mr. Akalifa was sitting behind a fellow party supporter on a motorcycle, moving about town among other party members in a jubilant campaign mood, when the pickup reportedly ran into them from behind after bursting a tyre some metres away from the rally grounds. He heard the results of the 2016 general elections with a slashed thigh and a bandaged leg in a hospital ward and watched the swearing-in of the leader of his much-loved party as President within the confines of a hospital bed.

He said the day he was admitted to the hospital was the last time he had seen the leaders of the party at both constituency and regional levels even though they had been notified about the incident.

“It is only the parliamentary candidate, Madam Gabiana, who comes here to visit me and supports me. The last time, she came and gave me Gh¢100. I have brothers who are not well to do but have stood by me since the day the accident happened six months ago,” Mr. Akalifa told Ultimate News.

Despite the alleged neglect, he proudly still wears an NPP-branded wristlet on his right hand, saying with a recovering tone that he has not regretted being a member of the NPP. 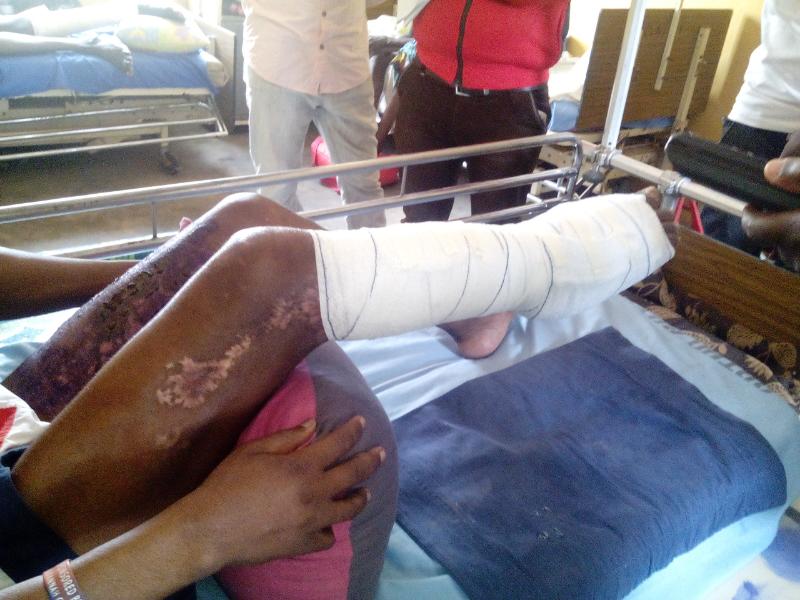 Until the crash happened, he was earning a living at a smock-weaving shop in Bawku where, according to him, he was making an average of Gh¢15 a day. With the 6 months spent so far at the physiotherapy unit multiplied by the everyday Gh¢15 he was earning, it is safe to conclude that the rally accident has robbed Mr. Akalifa, whose firstborn attends a fee-paying basic school, of about Gh¢2,700 he could have gained in the past 6 months had the shop remained opened.

As of the time newsmen visited the ward, one of his brothers, Rasheed Akalifa, who has been with him at the hospital since the last November, was knitting a smock on the floor of the ward between Hardi’s bed and that of another fractured patient whilst attending to his bedridden younger brother.

“He is sowing the smock for someone. That is the work we both do. I cannot sew in my condition. But he is managing to do it here whilst he is here to look after me and at the same time look after his own family,” Mr. Akalifa told Ultimate News.

Akalifa’s plight is news to us- NPP regional executives

The alleged inattention the NPP supporter is faced with in the hospital bed, for some observers, is only the reality that awaits members of the various political parties who risk their lives in the party interest.

Several able-bodied men have died horrible deaths in the region in the line of campaign for their parties, and the parties for which they suffered and died have never bothered for once to look after their wandering children or the families who became economically stranded after the untimely departure of their breadwinners.

There have been fatal accidents supporters bring upon themselves during political activities mostly by riding motorcycles at a daredevil speed on the highways. And there have been tragedies that rather claimed the lives of party enthusiasts well known for their compliance with all traffic rules and regulations at all times. “To be honest and sincere with you, if not today I have never heard of this matter at all. I’ve never heard of this accident. Nobody told me. This is my first time of hearing this news. I’m not aware. I’m not aware. I don’t have any comments unless I do my checks. At least, I’m the Regional Chairman and I’m coming from Bawku Central and nobody has mentioned this to me. I will do my checks,” the NPP’s Upper East Regional Chairman, Murtala Mohammed Ibrahim, told Ultimate News when contacted on Mr. Akalifa’s reported neglect.

The 2016 election showdown in Bawku between the NPP’s parliamentary candidate, Agbanwa Gabiana Abugri, and the candidate of the National Democratic Congress (NDC), Mahama Ayariga, was spectacular in form and remarkable in result. The two candidates chose extremely tough legislators- Kennedy Ohene Agyapong of Assin Central and Hannah Serwaa Tetteh of Awutu Senya West- to grace their campaign launch rallies.

The outcome was crossbred. Kennedy Agyapong, who won his seat, backed Agbanwa, the eventual loser in Bawku. Hannah Tetteh, who lost her seat, supported Ayariga, the eventual winner in Bawku. The two opposing men won their seats whilst the two conflicting women lost their bid.