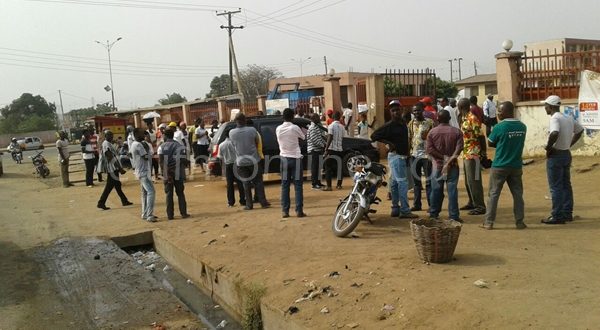 Some members of the New Patriotic Party (NPP) on Friday morning besieged the premises of the Ashaiman Municipal Assembly, to disallow the signing of a supposed last minute contract by the Ashaiman MCE, Ibrahim Baidoo.

Speaking to Citi News‘ Elvis Washington, the NPP Constituency Secretary for Ashaiman, Emmanuel Chapman, said his counterparts will remain at the Assembly premises until the meeting is called off.

“We think at this hour, it is politically incorrect to sign such a contract. This is the more reason why we have come here to protest and make our voices known that we are not going to allow the Assembly to do this at this hour.”

The Municipal Coordinating Director of the Assembly sought to allay their fears by explaining that the contract came up for discussion during a general assembly meeting but was not approved.

But Mr. Chapman said his group remained skeptical because the assembly had given similar assurances when they suspected it was issuing a last-minute contract for the main Ashiaman bus terminal.

The assembly proceeded to award a backdated contract for the main Ashiaman terminal to one Hajia Muni, according to Mr. Chapman.

“Because of that, we are very particular that if we don’t take action, this Atom contract which was revoked somewhere December 29, they are going to sign a new contract with them and validate it,” he stated.