Since the December 9 declaration of Nana Addo Dankwa Akufo-Addo as the winner of the 2016 elections, Party supporters are still in their celebration mood with the church not being an exception. 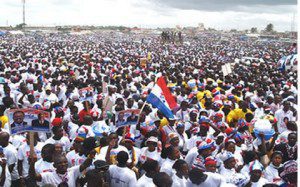 Most of the supporters of the New Patriotic Party (NPP)were on Sunday clad in white signifying victory, happiness and thanksgiving to God.

At the International Central Gospel Church, Seekers Temple Ashongman-Estate, the Ghana News Agency(GNA) noticed that some of the church member were in the NPP’s paraphernalia to complement their dressing.

During praises and worship the Party supporters danced passionately to show their gratitude to God.

Pastor Emmanuel Osei-Bediako, Pastor in-Charge of the Temple, led the congregation during the intercessory prayers for both President John Dramani Mahama and the President Elect Nana Akufo -Addo for God’s guidance and direction in the steering of affairs of the country.

He also prayed for peace to prevail in the country.

Some church members who spoke to the GNA expressed different views about the election.

While some members expressed happiness about NPP’s victory others urged the President Elect to fulfil all his promises when sworn into office next year for the progress of the country.

On December 7, Ghanaians went to the polls to elect a new President and 275 Parliamentarians.

On December 9, Madam Charlotte Osei, the Chairperson of the Electoral Commission declared Nana Akufo-Addo as the President elect with 53.8 per cent votes as against the National Democratic Congress’s John Dramani Mahama who polled 44.4 per cent