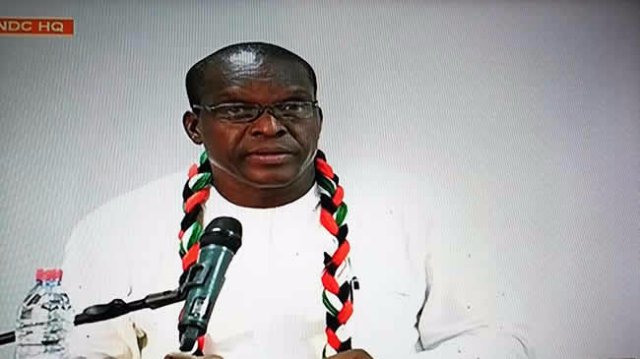 The Second Deputy Speaker of Parliament, Alban Sumana Bagbin has halsened that, there will soon be fire in the incumbent governing Party, the NPP by fighting themselves.
He said this when analysing the recent misfortunes of the NDC in the 2016 general elections which made President John D. Mahama a one – term president to the surprise of all Ghanaians, at the party’s Headquarters at Adabraka as part of activities marking the 25th Anniversary celebrations of the NDC.
Mr. Bagbin noted that, the party has historically been on the bad side of the media because, it left that space to the opposition NPP when it first won power in 1992.
“We were depending on the state media. NPP decided to invest in the private media. They still take care of the media than NDC even when we were in power,” he disclosed.
The second deputy speaker explained how the NPP began with only 64 MPs in 1997 and has now become a majority with a stranglehold on the current parliament, commanding 169 seats out of 275.
According to him, the NDC deserves better because “to be frank it’s the only national party” in Ghana.
Mr. Alban Bsgbin continued by unveiling the strength, weakness, opportunities and threats (SWOT) of the two parties. Saying, while the NPP may boast of professionals, the NDC has a numerical power of the ordinary people.
“They have a few lawyers who are just good at writing and talking. But we have the men and women more than them,” he said.
Apart from having a national character, he said to the credit of the NDC, the party also has a superior ideology of social democracy.
Alban Bagbin explained UNDP reports have always vindicated social democratic economies because, they are “always on top” of human development indices like life expectancy.
“That is the indication of where we should go,democratic  philosophy” he said, urging the country shdemocratic philosophy.
According to him, Western countries like the UK as well as the US, are struggling to meet the socio-economic needs of their people because the liberal ideology is “rat race” to survive.
He observed that, the NDC has service-oriented members while the NPP has money. “They belong to money we belong to service”, he said.
By a service-orientation he meant in the NDC, supporters don’t look up to leadership for money to run the party they offer money to leaders at various levels.
But he complained this trait may no longer be exclusive to the NDC because, the NPP in recent times, has been doing better at creating a political base, that contributes financially to the party.
Saying, the NPP supporters are paying Ȼ10 to register to become members while in the NDC “people are looking for the party to bring money”.
Looking at the way forward, he charged that, “It is now time for us to start and build a charter.”
By : Sammy Adjei/Newsghana.com.gh
Send your news stories to newsghana101@gmail.com and via WhatsApp on +233 244244807 Follow News Ghana on Google News