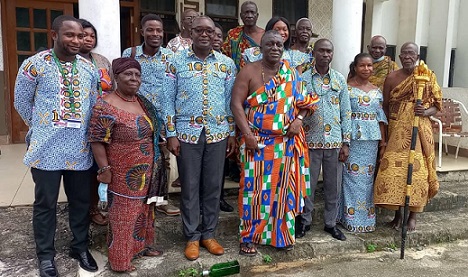 Mr Stanley Ogoe, Western Regional Director of the National Pensions Regulatory Authority (NPRA), says the Authority was taking steps to educate workers in the informal sector workers on the benefits of a retirement plan and becoming members of pension schemes.

According to him, workers in the informal sector have shown the least interest in the three-tier pension scheme and encouraged them to sign on to other schemes regulated by the Authority.

Mr Ogoe made this known when he paid a courtesy call on the Omanhen of Essikado Traditional Area, Nana Kobina Nketsia V and said plans were afoot for the Authority to roll out some programmes geared towards public awareness in the coming weeks.

He explained that the NPRA, which was established by the National Pensions Act 2008, (Act 766) to regulate and monitor the operations of the three-tier pension scheme, ensured effective administration of all pensions in the country.

He said the Authority also approved, regulated and monitored trustees, pension fund managers, custodians and other institutions that handled pensions and established standards, rules and guidelines for the management of pension funds under the Pensions Act.

He added that the NPRA received and investigated complaints of impropriety in respect of the management of pension schemes, and sensitized the public on matters relating to the various pension schemes.

Mr Ogoe said all was set for the NPRA to hold a public forum in Sekondi to sensitize and address the concerns of the public regarding pension plans and use drama to demonstrate ways to prepare for retirement and its corresponding benefits to market women in the Metropolis.

He added that they would undertake radio sensitization and partner all trustees under the Authority to adequately educate the public during the Pensions Week celebration.

For his part, Nana Kobina Nketsia commended the leadership of the NPRA for the plans to educate the public especially the informal sector, stressing that, one could not do away with retirement and that there was the need to properly prepare for it.

He urged them to be extra vigilant, be transparent and accountable in regulating the trustees, fund managers as well as the stakeholders under their supervision to ensure that contributors monies were secured especially, at a time when there have been so much malfeasances in the financial sector.

Nana Nketsia said the Ghanaian economy was bedevilled with inflation instability, which often made it difficult for the average Ghanaian to invest and impressed upon the NPRA to be proactive in managing the funds of contributors.