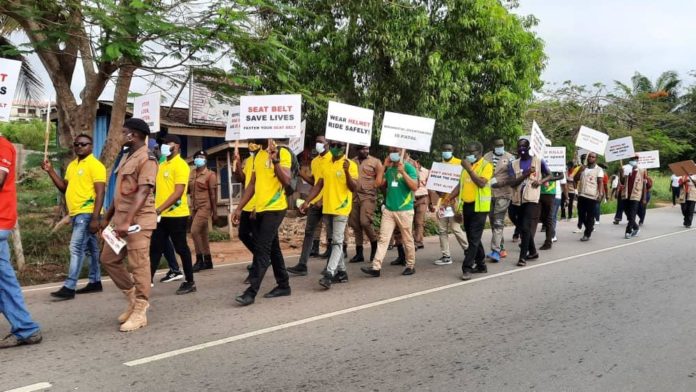 The National Road Safety Authority (NRSA), in collaboration with the Ghana Red Cross Society and the Ghana National Fire Service (GNFS) has embarked on a walk to create awareness on road safety practices.

The activity saw officers of the NRSA, GNFS and the Red Cross including other road safety advocates walking through the principal streets of Elmina and sharing fliers while educating the citizens on best road practices.

It formed part of the broader “Arrive Alive” campaign of the NRSA aimed at enhancing best practices for all categories of road users and planed activities to usher in the Christmas festivities.

Ms Linda Affotey-Annang, the Regional Head of the NRSA, said the intensified education had become necessary due to increased road accidents during Christmas and other festive occasions.

She said the exercise would be replicated in communities in the Region to drum home the calls for an accident-free Christmas and beyond.

She spoke against drunk driving, driving tired, and reckless use of the road, which often led to avoidable accidents.

Mrs Affotey-Annang urged passengers to speak up in a bold and polite manner when drivers misconducted themselves or report them to the police for appropriate action to be taken.

She further admonished motor riders to put on their crash helmets, obey all traffic signals and avoid reckless driving.

Superintendent Abraham Bansah, the Komenda-Edina- Eguafo-Abbrem Municipal Police Commander, giving statistics of road accidents in the Municipality, said a total of 71 road accidents had been recorded as at the end of the third quarter of this year.

He identified irresponsible speeding, driver negligence, faulty vehicles and the nature of the roads as some of the major causes of accidents and called for a collaborated efforts from all stakeholders to adequately enforce the laws.

Mr Paul Adjetey Dsane, a road safety advocate, called on passengers to learn road safety regulations because it was only when they were informed about the law that they could speak up.

Last Month, the NRSA launched a campaign at Winneba where it embarked on a sensitisation along the Accra-Cape Coast Highway to educate commuters and road users to be cautious on the road.