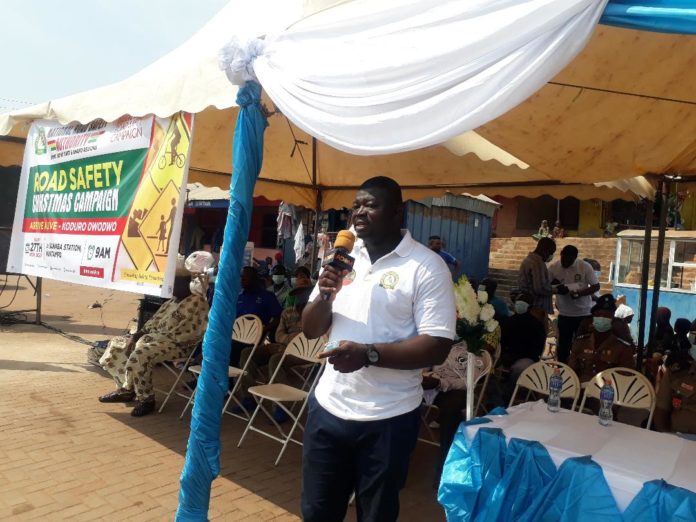 Dubbed “Arrive Alive”, the campaign also sought to prioritize and intensify road safety education to control crashes and fatalities on the highway in the Christmas festivities, and the Election 2020 season as well.

Speaking at a ceremony held at Kintampo in the Bono East region, Mr Kwasi Agyenim Boateng, the Bono, Bono East and Ahafo Regional Head of the NRSA, emphasised ensuring accident free Christmas remained a shared and collective responsibility among all road users and populace in general.

He indicated a more effective collaboration was also required between the Authority and other road agencies including; Driver and Vehicle and Licensing Authority (DVLA), Police Motor Traffic and Transport Department (MTTD), transport unions and associations in curbing road accidents.

Mr George Padmore Mensah, the Bono East Regional Coordinating Director, commended the NRSA for launching the programme at Kintampo saying the Techiman-Kintampo highway was an accident prone area and the campaign would achieve significant impact.

“The Techiman-Kintampo highway has been turned into a slaughterhouse killing people every day”, he said noting, “travelers on the highway are always frightened.

“In fact the RCC is worried about the number of deaths being recorded on the highway”, Mr Mensah said and underlined the need for a collective approach to tackle and help bring the crashes under control.

“This annual ritual of increases in road crash fatalities must stop. We should be committed to make road safety a key part of our development agenda”, he added.

Vehicles, he explained, were meant to serve and make life comfortable for humanity, and not to be employed as a ‘weapon of mass destruction’ saying “we should not continue to be seeing blood split on our roads through unnecessary speeding, drunk driving and fatigue driving”.

Representatives from the Police, Fire Service, Ambulance Service, and DVLA spoke and advised particularly drivers to ensure regular maintenance of their vehicles, check lighting systems and tyres before journeying and observe road signs.

Children marriage is a violation of their rights – Director