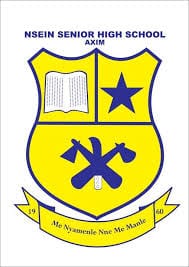 Nsein Senior High School in the Nzema-East Municipality has unveiled a number of activities to mark its diamond jubilee celebration planned to kick-start next year.

The occasion, which coincided with the 8th Memorial Lectures of the Late Headmaster, Very Reverend Timothy Ansah, showcased successes and challenges of the school.

The theme for the 8th anniversary celebration is: “Discipline and academic excellence as tools for national development: The role of stakeholders”.

Launching the 60th anniversary at the school premise, the Member of Parliament (MP) for Evaloe-Adjomoro Gwira, Mrs. Catherine A. Afeku, who is also an old girl of the school, lauded past and present school authorities carving a niche to put the institution on a high pedestal.

According to her, most products of the school formed the cream of the country’s human resource base and torch bearers who are now contributing to national development.

She paid tribute to Rev. Timothy Ansah for inculcating discipline and hard work into students at the time, a feat which culminated in academic excellence, thereby giving the school an enviable record.

She challenged current students to emulate the shining examples of their predecessors to keep the banner of the school aloft.

Mrs. Afeku entreated stakeholders to focus on issues such as supervision of teaching and learning, teacher absenteeism and extra-curricula activities among other academic interventions to make the school one of choice.

Touching on the school’s challenges, the MP who is also a Minister of State at the Presidency, said the government would expand infrastructure at the school.

“Nsein will not be left out of the US$1.5 six-unit classroom block fund allocation to schools especially with the intake of more students due to the free SHS programme,” she added.

She assured the school of her resolve to reconnect electricity to the girls’ dormitory, make adequate space for their dining hall, provide a bus to the school and put access roads on campus in good shape before the 60th anniversary celebration jumpstarts.

The Headmaster of the school, Mr. John Mochia, said the school obtained 89.2 percent pass in the last WASSCE out of which 68.46 qualified for admission to tertiary institutions.

The best performing male student scooped 6A1s and 2Bs, while his female counterpart also scooped 6A1s, B and C.
In this era of free Senior High School education, she said, the “Timothy Ansah Heritage” continued to award bursaries to some of the brilliant, but needy Day students.

Needy students are usually faced with the challenges of how to get their pocket-monies, transportation to and from school coupled with some basic educational needs.

Mr Mochia commended the GNPC foundation for its toilet project for the school which was 90 percent complete.

He also commended Messrs Kobina Afful, CEO of Lower Pra Rural Bank and Kazeh Anfo-, CEO, Kazeh-Moorem Company Limited for being instrumental in getting the 1984 batch of the Nsein Old Student Association (NOSA) to start a two 10-seater toilet facilities for the Girls ‘dormitories.

He also thanked Messrs Afful and King James for donating five pieces of computers and their accessories plus assorted books on Elective subjects to the school on behalf of NOSA 1984.

Mr. Mochia mentioned Mr. Joseph Forson, the General Manager of the Tema office of Electricity Company of Ghana (ECG) for donating GHC1,500 for the purchase of assorted books as his contribution to the school’s preparation towards the National Science and Maths Quiz competition.

The Headmaster said one of the challenges confronting the school was recruitment and mechanisation of casual workers as his outfit had for a a long time been struggling to have them enrolled unto the national payroll after the PTA signalled its inability to pay their stipends. But the move has proved abortive.

Mr. Mochia added that due to the ever-increasing enrolment figure, there was congestion at the dining hall, which compelled students to have their meals in turns.

This had a negative toll on instructional periods and the school’s Science and Laboratories, which were also not in proper shape.

He appealed to NOSA to paint the school block to befit the jubilee celebration.

The President of NOSA, Nana Nkwanta Bisa re-echoed Dr. Kwame Nkrumah’s words during the commissioning of then Kwame Nkrumah Secondary School that he Nkrumah was not “going to give money to sons and daughters of Nzema land, but would give them education to know the value of God’s creation and be happy”

He said he believed in Dr. Nkrumah’s philosophy that “it will be incoherently nonsensical for one person to think that he has the brains ordained by God to control the brains of others and the only way to assert oneself was through education”.

The Board Chairman of the school, Mr. Kodwo Atta Obeng said everything hinged on discipline, without which there would be chaos.

Nsein secondary school was established in 1960 with only few students and staff. The school now boasts of 2,048 students with 99 teaching and 42 non-teaching staff.

President leaves for Serbia for 60th Anniversary of Non-Aligned Movement