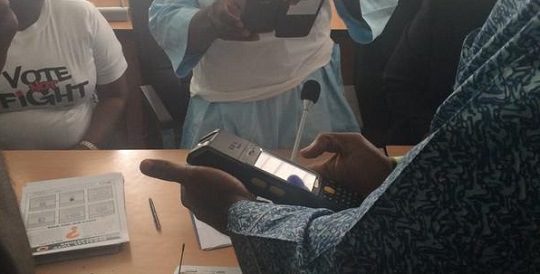 The President, Nigeria Union of Journalists (NUJ), Mohammed Garba, has applauded the use of card readers introduced by the Independent National Electoral Commission (INEC) for the rescheduled March 28 and April 11 elections.
Speaking on Monday in Kaduna, at a one day workshop, Garba, who is also the President, Federation of African Journalists described, the card reader by the electoral management, as an innovation that would enhance the credibility of election, stressing that the system will eliminate rigging.
The workshop tagged ?Media Role in Making the 2015 General Election Violence Free? was organized by the Nigeria Union of Journalists, Kaduna State chapter, with a view to refreshing the knowledge of working journalists in the state on election reporting. Recalling that rigging of the 2011 election, led to the post-election violence, he opined that with the use of card reader in this election, the issue of rigging is virtually eliminated, thereby reducing the incidence of electoral violence.