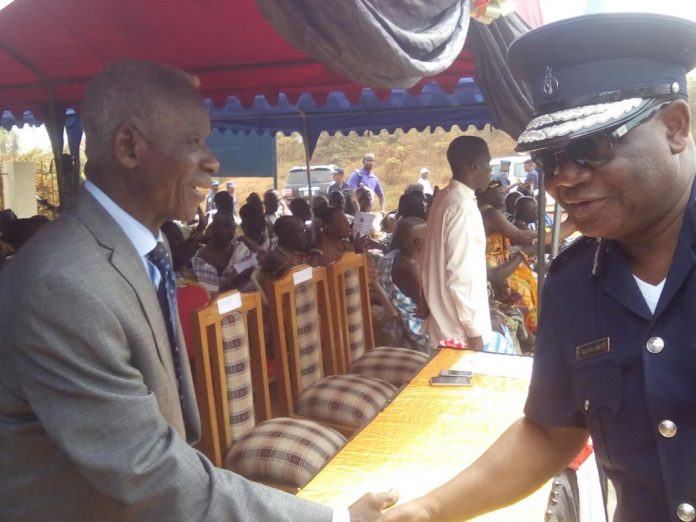 The human security coordinator, Brigadier General Nunoo Mensah  has built and fully furnished abpolice station for the people of Kwanyarko in the Agona East district of the central region.

The police station has a complaint counter, offices for station master and investigators and exhibits room.

The Ghc350, 000 project was built upon a request by the chief and people of Kwanyarko.

Agona Kwanyarko, the second biggest community in the Agona Eest district Assembly with a population of over 3000 did not have a police station until Nunoo Mensah built them one.

In 2011 he built a nurses quarters for the Kwanyarko health centre.

Addressing a ceremony to commission the edifice, the inspector general of the Ghana police service John Kudalor said the presence the police station would bring security that can attract investment and development to Kwanyarko.

He said that policing is a shared responsibility and thus called on the inhabitants of Kwanyarko to support the police service to combat criminal activities.

“Kwanyarko has everything with exception of a police station, so am appealing to you to inform the police to protect you and your properties. Policing is a shared responsibility so let us help them to protect us.” he stated.

For his part, Brigadier General Nunoo Mensah called on Ghanaians to support the president-elect Nana Addo Dankwa Akuffo Addo and his incoming government to build Ghana for the next generation.

“The election is now over; we need to support the incoming government to succeed with its policies. We have to stop insulting each other and work hard to build Ghana with the incoming president.”

The district chief executive of the Agona East district Assembly and the head of DISEC Mr. Francis Diodu Addo said the Assembly would ensure routine maintenance of the police station.