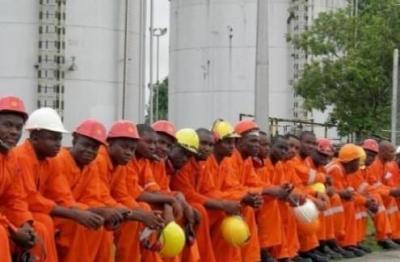 The minister of labour and productivity will today meet with officials of the Nigerian Union of Petroleum and Natural Gas Workers (NUPENG) and the Petroleum and Natural Gas Senior Staff Association of Nigeria (PENGASSAN) to avert the planned strike action by both unions.
NUPENG had threatened to start a nationwide strike by the first week of January, should the federal government insist on going on with its plan to privatise the nation?s four state-owned oil refineries.
There were earlier reports last week that the union had suspended its planned strike, but PENGASSAN officials said a decision will be taken after the meeting with government officials.
Sources in the labour ministry confirmed to our reporter that the labour minister will be meeting officials of both unions today.
However, our reporter gathered that the meeting is to persuade the unions to shelve the idea of its planned strike.
?We have been called to a meeting for Tuesday (today) with the minister of labour. But that has not changed anything. The strike will still go on unless the government meets the conditions we have given?, the source said.
The federal government had late last year constituted a committee headed by the Minister of Petroleum Resources, Diezani Alison-Madueke, to work out modalities for the sale of the four refineries located in Port Harcourt, Warri and Kaduna.