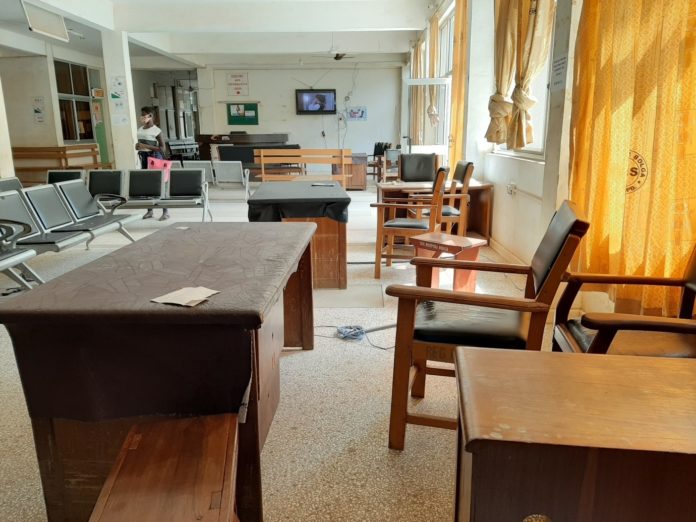 The nationwide strike action declared by the Ghana Registered Nurses and Midwives Association (GRNMA) and its allied Associations in public health facilities has intensified at the Upper East Regional Hospital in Bolgatanga.

The usually busy Out-Patient Department (OPD) of the Regional hospital was very quiet as at 1300hours when the Ghana News Agency (GNA) visited the facility to ascertain the impact of the strike action.

All nurses and midwives stations in the hospital were empty without any nurse or midwife on duty, while relatives of discharged patients crowded at “room three” where details of patients are entered before they are discharged.

The OPD and main emergency wards, were without nurses to attend to patients, however, Doctors were at critical units such as the Neonatal Intensive Care Unit, the maternity and children’s wards busily attending to patients.
The Intensive Care Unit (ICU) was locked without any patients in the two-bed capacity unit.

Dr Gillian Bogee, the Head of the NICU in an interview with the GNA disclosed that there were 13 babies with three new admissions and one preterm baby.

“Two are just coming in with bad conditions that we can’t turn them back. Currently, I am the only one working now in the unit, the nurses are on strike and it is very difficult.”

She explained that with the paperless system practiced in the hospital, “Once I see the babies, the nurses administer the drugs, and do the vital signs and all that.”

She said three of the babies were critically ill and were on oxygen and as the only Doctor, “I don’t think this can continue.”

A patient’s relative at the OPD of the hospital, Madam Janet Adongo, told the GNA that her brother was admitted yesterday, and said apart from the care the brother received yesterday, he had not been attended to, since morning.

“The patients are gradually dying. The suffering of patients I have seen so far is disheartening. We are appealing to the government to have mercy on the patients in this hospital and resolve its issues with the nurses before things get out of hand,” she said.

At the War Memorial hospital in the Kassena-Nankana Municipality, Dr Eric Wedam, the Acting Medical Superintendent, said they were not admitting patients except the very critical emergency cases.

He said with such cases, “we will stabilise and refer to any of the private facilities either in Bolgatanga, Sumbrungu or Paga. For those in the wards, we have been able to reduce their numbers to only three.”

He said all the patients at the various wards, especially the children, male and female wards were managed in the emergency ward, except pregnant women who were still at the maternity ward.

“Currently we have only four pregnant women we are trying to monitor to see if they can have a successful vaginal delivery, but if it turns out that they may need an operation, we will refer them to private facilities either at Paga or Bolgatanga.”