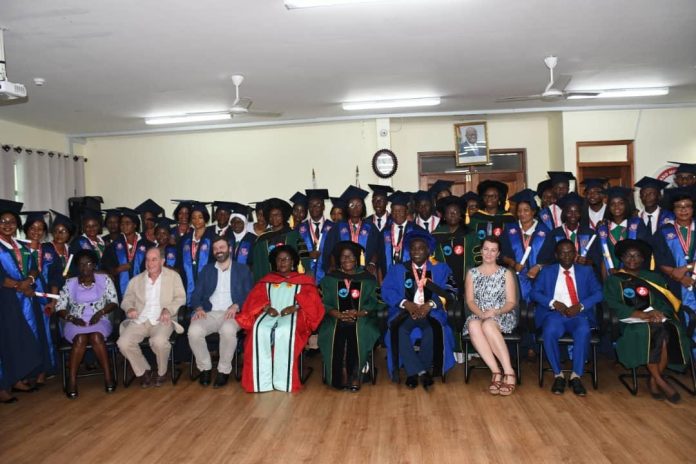 The Nursing and Midwifery Council (N&MC) of Ghana, on Tuesday, inducted 47 Sierra Nurses and Midwives into service, following their successful completion of a two-year Registered Diploma training in programmes.

Mr Felix Nyante, the Registrar of the Nursing and Midwifery Council, at the induction ceremony in Accra, said the inductees formed the first of a successful partnership programme between the Governments of Ghana and Sierra Leone, with sponsorship from Medicine Sans Frontiers (MSF), an international humanitarian Medical Organisation.

He explained that the MSF in 2017 made a formal request to the N&MC to facilitate the training of 50 enrolled Nurses and Midwives from Sierra Leone in Ghana for Diploma in Nursing and Midwifery, which was followed by the signing of a Memorandum of Understanding by the Ministry of Health, stakeholders and the MSF.

As part of the two-year training, the University of Cape Coast (UCC) served as the affiliate academic institution for the award of Diploma to the students, after the successful completion of their studies, whereas the N&MC regulated the training.

Mr Nyante said the graduates were trained by the Nursing and Midwifery Training Colleges (NMTC) at Korle-Bu and Koforidua respectively.

He commended them for their hard work and perseverance throughout their studies despite the cultural barriers.

Dr Sebastian Spencer, the Medical Director of Medicine Sans Frontiers, thanked the Government of Ghana for creating the opportunity for the students to undertake their studies.

He said the focus of his outfit was to provide access to quality healthcare, especially for deprived communities, and congratulated them for their success, and urged them to be professional by upholding the ethics of their profession.

Ms Gifty Tina Mensah, the Deputy Minister of Health, who delivered her address through the telephone, commended the MSF and all the collaborating institutions for the success of the programme, saying it should form a stepping stone for the strengthening of the Sierra Leonean health system to withstand the shocks of the re-emergence of any disease epidemic, especially the Ebola Virus Disease that hit the country in 2014.

Both Mrs Matilda Bansah and Ms Georgina Oppong, the Principals of the NMTC at Koforidua and Korle-bu respectively, added their voices to the commendations for their perseverance.

They both advised that the full knowledge of their training be translated into full action when they go back home, cautioning them against taking shortcuts, but to ensure that maternal mortality was reduced.

Rev. Veronica Mina Darko, the Chairperson of the 14th Governing Board of the N&MC, led the graduates to recite the Nurses’ Pledge and the Midewives’ Prayer, and swore oaths of allegiance to both countries.

The training project was part of the MSF’s strategy to develop the required level of human resources for a proposed 160-bed Paediatric and Obstetric Hospital in Kenema, Sierra Leone.

More than 200 health workers from the district lost their lives during the ebola epidemic, and the training would help the students to achieve their career objectives of upgrading themselves to provide quality healthcare.